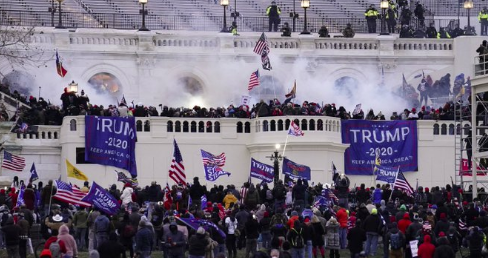 Capitol Police said yesterday that they have intelligence of a, quote, "possible plot" by the Three Percenters militia group to attack the U.S. Capitol today. The threat appears to be connected to the conspiracy theory mostly promoted by QAnon supporters that former President Donald Trump will return to power today, the original presidential inauguration date until it was moved to January 20th in 1933. The FBI and Department of Homeland Security also sent an intelligence bulletin Tuesday warning a militia group had discussed trying to take over the Capitol on Thursday. Capitol Police said they are, quote, "aware of and prepared for any potential threats." There is also still fencing around the Capitol complex that was put up in the wake of the January 6th attack. However, the House ended its work for the week last night due to the threat of violence.

U.S. Capitol Police say they're aware of and preparing for a threat by an unidentified militia group to breach the Capitol complex on March 4.https://t.co/5m3wCA5vSZ

➤HOUSE PASSES SWEEPING VOTING RIGHTS LEGISLATION: The Democratic-led House passed sweeping voting rights legislation last night on a near party-line vote, the action coming at the same time as Republican-controlled states are moving towards enacting tighter voting restrictions. Its prospects in the Senate are very uncertain, where it will have little chance to get the 60 votes that would be needed to break an expected Republican filibuster. The Democrats claim the legislation is needed to fight voter suppression efforts, while the GOP claims it would inject federal interference in states' authority to conduct their own elections. Among its provisions, the legislation would: require states to automatically register eligible voters; offer same-day voter registration; limit states’ ability to purge registered voters from their rolls; restore former felons’ voting rights; require states to offer 15 days of early voting; and allow no-excuse absentee voting. It would also mandate that nonpartisan commissions handle the redrawing of congressional districts to block partisan gerrymandering, and force the disclosure of donors to "dark money" political groups.

➤CUTOFF THRESHOLD LOWERED FOR DIRECT PAYMENTS IN $1.9 TRILLION COVID RELIEF BILL: President Biden and Senate Democrats agreed yesterday to lower the income cutoff threshold for the direct payments that will go to Americans under Biden's $1.9 trillion Covid-19 relief bill, agreeing to what moderate Senate Democrats wanted. Under the legislation, individuals earning up to $75,000 will get $1,400 and couples earning up to $150,000, will get $2,800. The version approved by the House would gradually reduce that amount as salary increases until individuals making $100,000 and couples earning $200,000 get nothing. Under the compromise, the cutoff would be moved down to $80,000 for individuals and $160,000 for couples. However, the moderates didn't win on weekly emergency unemployment benefits, which will remain at $400 weekly in the bill, and not be reduced to the $300 weekly they'd wanted.

The White House staff would never be given permission to cut President Trump’s video feed, which raises the question, who is running the White House? pic.twitter.com/RcG35kt8T2


➤U-S WARNS OF POSSIBLE MILITARY RESPONSE TO ROCKET ATTACK ON IRAQ BASE: The U.S. warned of a possible military response to a rocket attack early Wednesday on an air base in Anbar province in Iraq where U.S. and coalition troops are housed. A U.S. contractor died, reportedly of a heart attack, after at least 10 rockets hit the base. No group claimed responsibility, but the attack came after the U.S. bombed Iran-backed militia targets along the Iraq-Syria border last week. Those U.S. strikes came in response to an attack on American forces in Iraq earlier in February. 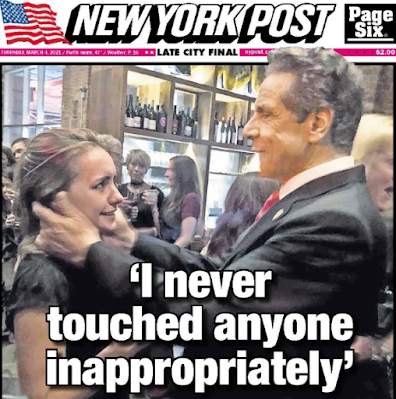 ➤CUOMO APOLOGIZES AGAIN, SAYS HE'S NOT RESIGNING: New York Governor Andrew Cuomo apologized again yesterday after three women have come forward to accuse him of sexual harassment and inappropriate touching and remarks, two of them former members of his administration, but rejected calls for him to step down, saying he's not resigning. In his first public appearance since the accusations came out, the governor said he'd, quote, "learned an important lesson," saying, "I now understand that I acted in a way that made people feel uncomfortable. It was unintentional and I truly and deeply apologize for it." He said that what he called his "customary greeting" of kisses and hugs isn't acceptable, as, quote, "sensitivities have changed and behavior has changed." He also stated, "I’m embarrassed by what happened... I’m embarrassed that someone felt that way in my administration." He said he will fully cooperate with the independent investigation that will be carried out overseen by the state attorney general. But asked about the calls from some for him to step down, Cuomo said, "I wasn’t elected by politicians, I was elected by the people of the state of New York. I’m not going to resign."

➤SUV IN CALIFORNIA CRASH IN WHICH 13 KILLED CAME THROUGH CUT OUT PART OF BORDER FENCE: Immigration officials said yesterday (March 3rd) that an SUV that crashed in Southern California near the border with Mexico Tuesday, killing 13 of the 25 people who were packed inside, had driven through a section of border fence that had been cut away, apparently by smugglers. Surveillance video showed the vehicle carrying migrants trying to sneak into the U.S. illegally driving through the opening. The SUV was hit by a tractor-trailer shortly after going through the fence.

13 people killed in California SUV crash were among 44 who came through hole in border fence https://t.co/xvTreMzGAL

➤RESTAURANTS ARE REPORTEDLY BEING HURT BY REFUND REQUEST SCAMS:  Restaurants across the U.S. are being hurt by people scamming them for refunds. Los Angeles-based restaurant Spoon By H wrote on February 22nd, “We are heartbroken to find ourselves sharing the very news we hoped we would never have to share… Spoon By H will be closing. Although we put up our very best fight, we could no longer hold out against the growing barrage of fraudulent disputed charges and the countless refunds issued.” Similarly, Bell’s BBQ, based in Henderson, Nevada, has reportedly been affected by this new “dine and dash” scam on third-party delivery apps. The restaurant’s owner says he and his team try to be thorough when they fulfill orders, but that items can be marked as incorrect, which usually results in a partial refund from most delivery services. GrubHub and DoorDash have released statements saying they do not tolerate misuse of their platforms, while Postmates and UberEats both have web pages that state there are policies in place to address potential fraud. As for Spoon By H, a GoFundMe campaign was started by a customer and raised over $71,700 for the 9-year-old restaurant.
➤MERCURY, JUPITER TO APPEAR SIDE BY SIDE IN WEEKEND SKY: The smallest and largest planets in the solar system will meetup as the first week of March concludes. Friday morning, Mercury and Jupiter will appear side by side in the sky in an astrological event called a conjunction. This type of conjunction is not particularly rare, and it’s the second time this year that Mercury and Jupiter are converging in the night sky. To see it, you’ll need to look southeast about an hour before sunrise with the two eventually fading away as the light from the sun brightens the sky in the approach to daybreak. Saturn will also be glowing nearby, above the duo and off to the right. The event will be visible around the entire globe, but the placement of the planets will look slightly different for those skygazing from south of the equator. If cloudy conditions obscure the sky on Friday, people can check out the event Saturday (March 6th) or Sunday (March 7th) morning, as they’ll still be close to each other, but not as close as they will be on Friday. 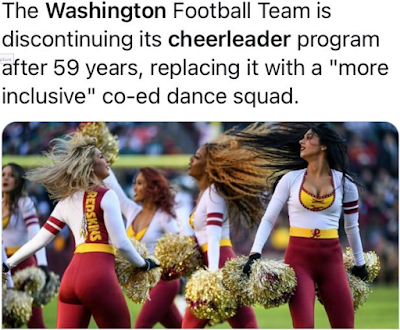 🏈WASHINGTON FOOTBALL TEAMS DROPPING CHEERLEADERS FOR COED DANCE TEAM: The Washington Football Team is dropping its cheerleaders and replacing them with a coed dance team, part of its efforts to rebrand. Former Laker Girls manager Petra Pope, who also launched the Knicks City Dancers and redesigned the Nets' entertainment when they moved from New Jersey to Brooklyn, was hired yesterday (March 3rd) as an adviser to overhaul the performing group. Pope told AP, "I’ve been asked to create a more modern entertainment team that is inclusive and diverse. We just want to follow that mode of being more modern and a more modern franchise." The future dance team doesn't yet have a name. Pope said the previous cheerleaders would be able to try out for the new dance team, quote, "as long as they have that athletic skill set."
🏀HARDEN HAS TRIPLE-DOUBLE IN RETURN TO HOUSTON AS NETS WIN 132-114: James Harden had a triple-double for the Brooklyn Nets in his first return to Houston to play against his former team as the Nets topped the Rockets 132-114. Harden, who was traded to the Nets on January 14th, had 29 points, 10 rebounds and 14 assists. He got a mixed reception from the reduced capacity crowd of 3,615, with some boos when he was first introduced, but also cheers as the Rockets played a video showing some of the highlights of his eight seasons with Houston during a first-quarter timeout.

🏀PACERS' MCCONNELL SETS NEW STEALS RECORD: The Indiana Pacers' T.J. McConnell broke the NBA record for steals in a half last night when he got nine steals in the first half of the Pacers' 114-111 win over the Cleveland Cavaliers. The 28-year-old finished the game with 10 steals, part of a triple-double with 16 points and 13 assists, the second of his career.

➤EX-NFL PLAYER WINSLOW SENTENCED TO 14 YEARS IN PRISON FOR MULTIPLE RAPES: Former NFL player Kellen Winslow II was sentenced Wednesday to 14 years in prison for multiple rapes and other sexual offenses against five women in Southern California. The 37-year-old former Cleveland Browns star, who was once the highest-paid tight end in the NFL, where he played for 10 seasons, declined to comment before his sentencing, but said, "In the future, I do plan to tell my story." Among Winslow's victims were a homeless woman, a hitchhiker, and a passed-out teenager at a party. 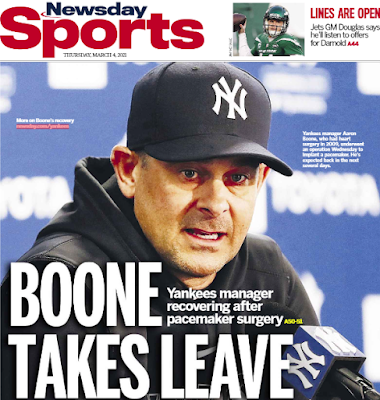 ⚾YANKEES MANAGER BOONE TAKES LEAVE TO GET PACEMAKER: New York Yankees manager Aaron Boone took a leave of absence Wednesday (March 3rd) to get a pacemaker for a low heart rate. The team said the procedure went as expected and Boone plans to return to the Yankees in a few days. Bench coach Carlos Mendoza took over as acting manager for last night's spring training game against the Toronto Blue Jays, which the Yankees won 4-1. The 47-year-old Boone, who is entering his fourth season at Yankees manager, underwent open-heart surgery in 2009.

➤REPORT...NO FANS FROM OTHER COUNTRIES TO BE ALLOWED AT TOKYO OLYMPICS: Plans are still on for the Tokyo Olympics to be held this summer, after being delayed from last year due to the pandemic, but no fans from other countries will be allowed to attend, according to report. The Japanese newspaper Mainichi reported yesterday (March 3rd) that the decision had been made to exclude foreign fans because of pandemic concerns. The new president of the Tokyo Olympics organizing committee, Seiko Hashimoto, hinted at that yesterday after online talks with International Olympic Committee President Thomas Bach and others. She said a decision will be made by the end of the month.
Posted 4:23:00 AM