Keyshawn Johnson is headed to mornings on ESPN Radio as part of a shake-up that could leave Mike Golic without a chair, The NY Post reports.

According to Andrew Marchand at The Post, ESPN and Johnson are in agreement on a contract that will directly impact the current morning team of Trey Wingo’s and Golic Sr.’s ESPN’s futures.

Johnson’s partner or partners are still undetermined. He’s expected to begin in mid-August, but that could be impacted by the pandemic. 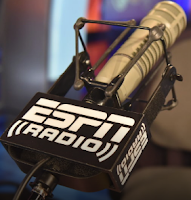 Both Wingo and Golic have contracts that end at the conclusion of this year. The third member of the Golic and Wingo morning team is Mike Golic Jr.

Golic Jr. is under contract past this year and is expected to remain on a revamped lineup, likely in the afternoon or evenings.

Meanwhile, Golic’s old radio partner, Mike Greenberg, is moving closer to an early afternoon slot to add to his TV duties as the host of “Get Up.”

Network executives have discussed slicing an hour off of the Dan Le Batard program that currently runs from 10-1 p.m., according to The Post citing sources, and having Greenberg work 12-2 p.m., but Le Batard, who has two years remaining on his deal, may still hold onto his full three hours with Greenberg moving into a 1-3 p.m. It is undetermined.

Hovering over all ESPN’s moves is the pandemic that has already impacted the network’s plans. ESPN and its parent company, Disney, have been affected greatly and, though there has been a hope that July would be a turning point, the renewed infection rate around the country may cause ESPN to kick more decisions further down the summer, according to Marchand.

ESPN New York’s Peter Rosenberg and Chris Carlin are two names that have been mentioned for mornings, as well. Rosenberg would be a bit more complicated because, besides his Michael Kay duties, he is already on a morning show with WQHT Hot 97. Hot 97 owns a station option on Rosenberg’s contract for next year.
Posted 3:50:00 AM