The Rundown: Fauci Says Next Week Is Critical

➤FAUCI SAYS NEXT WEEKS CRITICAL IN DEALING WITH CORONAVIRUS SURGES: Dr. Anthony Fauci said in testimony before a House committee yesterday that the next few weeks are critical in working to bring down coronavirus case surges that are being seen in several states in the South and West, as he urged people to avoid crowds and wear face masks. The nation's top infectious disease expert said that if the U.S. doesn't get control of the pandemic by the fall, quote, "you're essentially chasing after a forest fire."

Arizona, California, Mississippi, Nevada and Texas all set single-day records for new coronavirus cases yesterday, and other states with concerning surges include Louisiana, Utah and South Carolina. In more optimistic news, Fauci also said that, quote, "it will be when and not if" for a vaccine, and that he's "cautiously optimistic" that some vaccine could be available by the end of the year.

European Union May Bar Visitors from U.S.: As European Union nations continue to ease their coronavirus restrictions, including opening up to allowing travelers from other countries, they are considering barring visitors from several countries, including the United States, the New York Times reported yesterday. The E.U.'s decision on which countries to allow visitors from will be based on how those nations are doing with controlling the pandemic, and the U.S. has the highest number of both coronavirus deaths and infections in the world. The U.S. severely restricted travel from large parts of Europe earlier this year because of the coronavirus.

Daily Count: There have been more than 121,200 deaths as of last night, according to Johns Hopkins University's count, and more than 2,345,000 confirmed cases.

➤TRUMP SPEAKS AT PACKED MEGACHURCH IN ARIZONA, VISITS BORDER: President Trump spoke before hundreds of young conservatives in a packed megachurch in Phoenix yesterday, with no social distancing and few wearing masks despite Arizona being one of the states seeing the biggest surges in coronavirus cases. As he spoke to the members of the Students for Trump at Dream City Church, Trump again referred to the coronavirus as "kung flu," as he did at his Tulsa rally over the weekend, using a term Asian-Americans say is racist. Referring to the November election, Trump declared, "This will be in my opinion the most corrupt election in the history of our country. And we can not let this happen." There have been calls for expanded mail-voting in November because of the coronavirus, and Trump has repeatedly claimed without basis that doing so would lead to voter fraud. Earlier in the day, Trump visited the border with Mexico in Arizona, where he inspected a new section of border wall and signed it, and contended the wall had stopped illegal immigration and the coronavirus.

➤POLL: NEARLY ALL AMERICANS SUPPORT CRIMINAL JUSTICE REFORM: George Floyd's death and the weeks of protests following it seem to have had an effect on Americans' opinions, with a new Associated Press-NORC Center for Public Affairs Research poll finding that most Americans support at least some criminal justice reform. In the survey, 29 percent said they think the criminal justice system needs "a complete overhaul," 40 percent say it needs "major changes" and 25 percent say it needs "minor changes," with just five percent saying no changes are needed.

But while some protesters have been calling for "defunding" the police, just 25 percent of Americans favor reducing law enforcement funding. 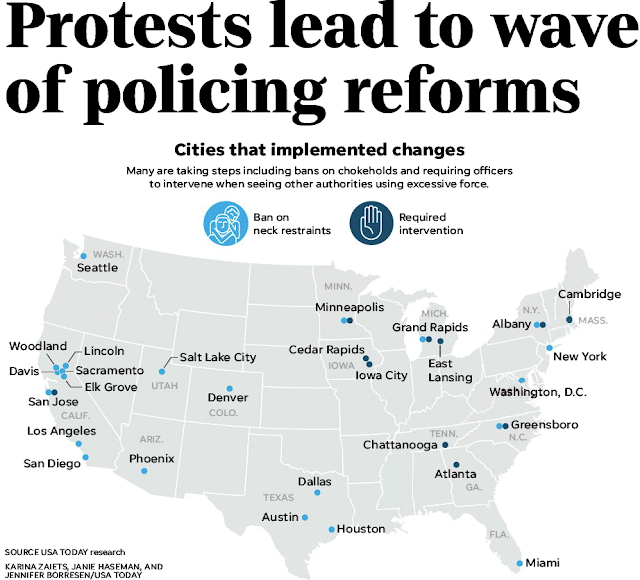 ➤SENATE DEMOCRATS OPPOSED TO REPUBLICANS' POLICING REFORM LEGISLATION: The effort to get policing reform passed in Congress in the wake of weeks of national protests following George Floyd's death stalled Tuesday as Senate Democrats opposed Republicans' proposed legislation. The GOP measure would create a national database of police use-of-force incidents, restrict the use of chokeholds and establish new training procedures. However, a proposal from House Democrats is more sweeping, including allowing police to be held liable for damages in lawsuits. Top Senate Democrats called for negotiations on a new bipartisan package. House Speaker Nancy Pelosi told CBS News Radio that Republicans need to have a better bill, saying, "They were trying to get away with murder, actually -- the murder of George Floyd." That led to calls from Republicans for her to apologize.

➤STUDY: CORONAVIRUS PANDEMIC COULD LEAD TO 500,000 FEWER U.S. BIRTHS: In contrast to those who've suggested that all the coronavirus lockdowns could lead to a baby boom nine months down the road, a new study suggests instead that the pandemic could lead to 500,000 fewer births in the U.S. than would otherwise be expected. Researchers at the Brookings Institution looked at data from previous studies on fertility in the U.S. during the 2007-2009 Great Recession and the 1918 flu pandemic, as well as other factors like job losses during the current pandemic, and predicted a decline in U.S. births of some 300,000 to 500,000. The chief medical and health officer at the nonprofit March of Dimes told CNN they'd reached a similar conclusion, saying there was about a 10 percent drop in fertility about nine to 10 months after the peak of deaths in the 1918 pandemic. 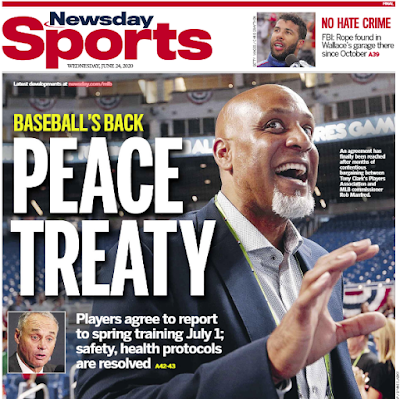 ➤MLB ISSUES 60-GAME SCHEDULE TO START JULY 23RD OR 24TH: Major League Baseball issued a 60-game schedule for a coronavirus-delayed season on Tuesday night (June 23rd), which will start on July 23rd or 24th, ending months of back-and-forth rejected proposals between MLB and the players' union. Commissioner Rob Manfred unilaterally set the schedule, as he was able to do under a March deal with the union if, as happened, an agreement for the season wasn't able to be reached. With Manfred setting the schedule, MLB and the union were able to agree on an operations manual. In changes for the season, the designated hitter will be used in National League games, and extra innings will start with a runner on second base. Players will start reporting to resume training on July 1st.

➤FBI FINDS NOOSE-LIKE ROPE WAS PULL-DOWN THERE FOR MONTHS, DIDN'T TARGET WALLACE: The FBI said Tuesday (June 23rd) that a noose-like rope discovered in the Talladega Superspeedway garage stall of Bubba Wallace, NASCAR's only Black driver, was a pull-down rope and had been there at least since October, and said nobody could have known Wallace would have been assigned to that stall. They therefore concluded it wasn't a hate crime. Federal investigators were called in after one of Wallace's crew members found the rope and believed it was a noose meant to send a message to Wallace, who'd pushed NASCAR to ban Confederate flags from its races some two weeks earlier. NASCAR said it was the only garage stall with a rope tied to resemble a noose, and even though no charges are being filed, President Steve Phelps said NASCAR is investigating why the rope was tied that way, while saying he was pleased it wasn’t a hate crime directed at Wallace.

"I'm pissed. I'm mad because people are trying to test my character and the person that I am and my integrity." - NASCAR driver Bubba Wallace on social media reaction to the conclusion of the FBI investigation into the noose found in his team's garage https://t.co/YH4ynYqv64 pic.twitter.com/fB0m9Yj9FD
— CNN Tonight (@CNNTonight) June 24, 2020


Wallace, who was angered by those calling the whole incident a hoax after the FBI's announcement, said on CNN last night, "It was a noose that, whether tied in 2019 or whatever, it was a noose. It wasn't directed at me, but somebody tied a noose . . . "

Now that we know the #BubbaWallace “noose” was not a racist attack at all, will ⁦@jemelehill⁩ apologize to the NASCAR fans she unfairly besmirched?
Jemele Hill Condemns NASCAR Noose Incident: ‘Disgusting Reminder of Who This Sport is for’ https://t.co/BPF9YRgFQl
— Megyn Kelly (@megynkelly) June 23, 2020


➤DJOKOVIC TESTS POSITIVE FOR CORONAVIRUS: The world's top-ranked men's tennis player, Novak Djokovic, announced Tuesday (June 23rd) that he'd tested positive for the coronavirus, as has his wife. The news came after two other top 40 men's players also tested positive after taking part in a series of exhibition matches that Djokovic organized and played in that took place in Serbia and Croatia. There was no social distancing at the matches, with fans packed into stands, and players casually interacted with each other and partied at night clubs. Djokovic, who doesn't have symptoms, said on social media, "We believed the tournament met all health protocols . . . We were wrong and it was too soon." He stated, "I am extremely sorry for each individual case of infection."