The Rundown: Half Of U-S Sees Spike In Coronavirus Cases

Nearly half of U.S. states are seeing an increase in new coronavirus cases, with surges continued to be seen across the South and West. In some of the latest concerning data: the number of people hospitalized with the virus in California is the highest it's been since the start of the pandemic; infections in Georgia are at their highest level since the outbreak began; cases passed 100,000 in Florida; and 20 percent of those being tested in Arizona are positive, the highest in the country and double the 10 percent that's experts say is concerning. In Texas, where there were record hospitalizations for an 11th straight day, Governor Greg Abbott said the virus was spreading at, quote, "an unacceptable rate." He didn't announce any new measures, bur urged mask-wearing, something he has refused to mandate. He said, "I know that some people feel that wearing a mask is inconvenient or that it is like an infringement of freedom. But I also know that wearing a mask will help us to keep Texas open."

There have been more than 120,300 deaths in the U.S. as of last night, according to Johns Hopkins University's count and more than 2,310,000 confirmed cases. 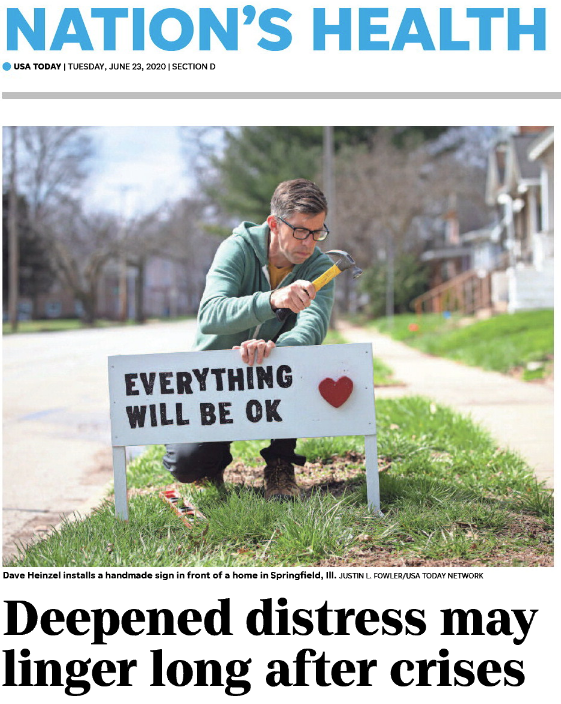 NYC in Phase 2: New York City, once the epicenter of the outbreak in the U.S., moved into Phase 2 of its reopening yesterday, which includes allowing people back in stores, office workers to come back, barbershops and hair salons to reopen, and restaurants to allow outdoor seating. That came after the first phase that began June 8th allowing construction work, curbside pickup from retailers and manufacturing.

Atlantic City Casinos Can Reopen July 2nd: New Jersey Governor Phil Murphy said yesterday that Atlantic City’s casinos will be allowed to reopen on July 2nd, but they will be restricted to 25 percent capacity and both employees and guests must wear masks. That's not the case in Las Vegas, where as its casinos reopened earlier this month, mask wearing is not a requirement.

No Direct Trump Answer on Asking for Testing Slowed: President Trump didn't directly respond yesterday when questioned if he'd asked for coronavirus testing to be slowed down, something he said during his Tulsa rally Saturday which the White House has been brushing off as a joke. When asked during an interview yesterday about whether he did make the request, Trump didn't directly answer, saying, "If it did slow down, frankly, I think we're way ahead of ourselves."

➤SEATTLE MAYOR SAYS THE END IS NEARING FOR CHOP: Seattle Mayor Jenny Durkan said Monday that the city will move to end the "Capitol Hill Occupied Protest" zone, a blocks-long area near downtown taken over by protesters against racial inequality and police brutality two weeks ago, after two nighttime shootings there this weekend. Durkan said the violence was distracting from the changes the peaceful protesters were trying to achieve. The mayor said that they are working with the community to end the "CHOP" zone, but didn't give a timeline, and said, quote, "additional steps" would be looked at if people didn't leave voluntarily. There has been a festival-like atmosphere in the CHOP zone during the day, but there's been a more dangerous atmosphere at night.

➤PROSECUTORS INVESTIGATING NYC OFFICER FOR CHOKEHOLD: Prosecutors said Monday that they'd opening an investigation into the actions of New York City Police Officer David Afanador, who was caught on video Sunday using what the police commissioner said was a banned chokehold on a Black man. He could potentially face criminal charges. It was reported that Afanador faced charges in a previous case on allegations he pistol-whipped a teenage suspect and broke two of his teeth, but he was acquitted. Afanador has been suspended without pay. In Sunday's incident, video shows several officers restraining the man on his stomach with Afanador appearing to have his arm wrapped around the man's neck. A bystander can be heard saying, "Stop choking him." The officers were reportedly responding to a 911 call about three men harassing people and throwing objects at them. Body camera video shows three men arguing with police and one of them approaching the officers and saying, "You scared?" before one of the officers appears to tackle him.

➤ARMY SOLIDER ACCUSED OF GIVING CLASSIFIED INFO TO WHITE SUPREMACISTS: U.S. Army Private Ethan Melzer is facing terrorism charges after allegedly giving classified information about American troops overseas, including their whereabouts, movement and security details, to a white supremacist group in a plot against his own unit.

BREAKING: Ethan Melzer, 22, allegedly planned to attack his own Army unit by sending sensitive details about its location, movements and security to members of an extremist group, according to an indictment unsealed in Manhattan federal court. https://t.co/5faJMxa96g
— Eyewitness News (@ABC7NY) June 22, 2020


The charges announced yesterday said 22-year-old Melzer gave the information to the Order of the Nine Angles (O9A), and it was supposed to be used to carry out a "mass casualty" incident. The Southern Poverty Law Center describes O9A as an "occult neo-Nazi" organization. Melzer joined the group in 2019, the year after he joined the Army. FBI and Army officials late last month thwarted Melzer's plan to have his own unit attacked. Prosecutors said the Melzer admitted to his plan after his arrest, and said his goal was to kill as many service members as possible, according to prosecutors.

BIDEN CAMPAIGN REJECTS TRUMP CALL FOR MORE THAN THREE DEBATES: Presumptive Democratic presidential nominee Joe Biden's campaign said Monday that Biden will take part in the three presidential debates that have previously been announced, and rejected President Trump's campaign's call for holding more of them. In a letter to the Commission on Presidential Debates, Biden campaign manager Jen O'Malley Dillon, said, "[J]oe Biden will accept the Commission's debates, on the Commission's dates, under the Commission's established format and the Commission's independent choice of moderators. . . . That is what every candidate for President and Vice President have done in modern times, Democrat and Republican alike. . . . Any 'debate proposals' in lieu of that are just an effort to change the subject, avoid debates, or create a distracting 'debate about debates.'" Trump campaign communications director Tim Murtagh said in response, "It's pretty obvious that Joe Biden's handlers are afraid to send their candidate out without a script and teleprompter handy." In addition to asking for the Commission to hold more debates, Trump's campaign also wants a say in picking the moderators.

➤APPLE UNVEILS NEW FEATURES IN IOS14: Apple unveiled its newest update to the iPhone's operating system, iOS 14, during its Worldwide Developments Conference Monday, which was held virtually because of the coronavirus pandemic. Among the new features in iOS 14, which won't be available until September: 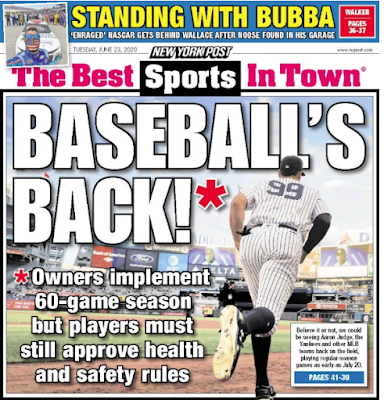 ➤MLB TO SET 60-GAME SEASON AFTER PLAYERS REJECT DEAL: MLB plans to set a 60-game, coronavirus-delayed regular season schedule for this year after the players' union yesterday voted down a proposal of the same length with other provisions, including an expanded postseason, ending three months of back-and-forth rejected proposals. MLB used the right given to it in a March 26th agreement with players to impose a schedule of the length it wanted. Opening Day would likely be at the end of July. 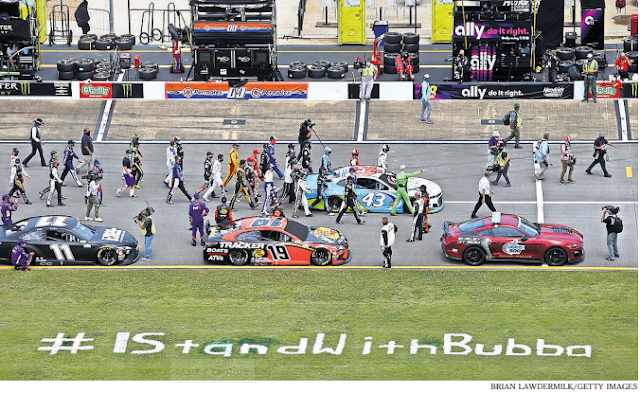 ➤NASCAR UNITES BEHIND WALLACE BEFORE RACE WON BY BLANEY: After a noose was found Sunday in the garage stall of Bubba Wallace, NASCAR' s only Black driver, at Talladega Super Speedway, the other drivers came together Monday to show unity in support of him. Before yesterday's race at Talladega, which had been delayed from the day before because of rain, the 39 other drivers and their crews pushed Wallace's car to the front of the field. An emotional Wallace got out of his car and cried. Additionally, 82-year-old Hall of Fame driver Richard Petty, for whom Wallace drives, stood next to him during the National Anthem. The FBI is investigating to try to find out who left the noose, an incident that happened less than two weeks after Wallace successfully pushed NASCAR to ban the Confederate flag at races.
Posted 4:24:00 AM