The Tennessean and its parent company Gannett announced on Monday that an advertising manager was fired after the news organization published an anti-Muslim advertisement.

The full-page Sunday ad, purchased by an Arkansas-based organization centered on end-of-world preaching, used religious language to predict an impending nuclear attack in Nashville by “Islam.”

An internal investigation revealed three Tennessean advertising staff members "had the opportunity to review the ad in its entirety" before it was published, according to Kathy Jack-Romero, the president of local sales for Gannett.

"The sales and design teams did not fully read the context of the ad content in its entirety and subsequently approved it," Jack-Romero said.

A sales executive did flag the ad for review, but the sales manager "agreed to proceed with the ad without fully reviewing the content," Jack-Romero said in an email responding to questions.

That manager was terminated Monday. 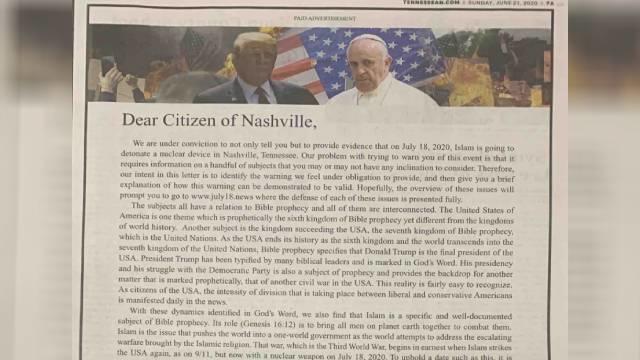 A similar ad, which made apocalyptic predictions but did not mention Islam, ran Wednesday. Digital ads purchased by the same group were removed from Tennessean.com Sunday.

Gannett provides annual mandatory training on diversity and inclusion to all employees corporate-wide. Jack-Romero said the company would coordinate with the advisory council for a round of diversity and sensitivity training for The Tennessean newsroom and sales teams. Additional training will be done company-wide for the entire sales division.

Jack-Romero echoed other Gannett and Tennessean executives Monday, condemning the ad and vowing to address its effect in Nashville.

“We have completed our review, taken action against the manager responsible, strengthened our processes to ensure this never happens again, and taken steps to mitigate the tremendous harm caused to the community," Jack-Romero said. "We apologize for publishing this ad and we specifically apologize to the Muslim community, in Nashville and more broadly. This should have never happened.”

Muslim leaders in Nashville said they had been in contact with Tennessean leadership Sunday and Monday. They asked the organization to create more safeguards to stop similar messages from being printed in the future.
Posted 1:11:00 AM