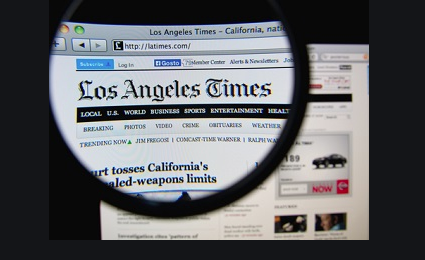 Two years after the Los Angeles Times reverted to local ownership, one of the country’s largest metropolitan daily newspapers is facing a painful internal reckoning over glaring deficiencies and missteps regarding race and representation in its pages and its staff.

On Wednesday, Executive Editor Norman Pearlstine heard from aggrieved newsroom staff members during a more than four-hour meeting examining the mistreatment of Black and brown editorial staff members past and present. He acknowledged that the 138-year-old paper had failed to capitalize on an unprecedented opportunity to better diversify its newsroom since its 2018 purchase by L.A. biotech billionaire Dr. Patrick Soon-Shiong.

Wednesday’s meeting was conducted by Zoom videoconference because staffers have been working from home during the COVID-19 pandemic. It came three weeks into a raw and deeply emotional self-examination that has unfolded on internal communications channels, a wide-ranging discussion about the paper’s news coverage and treatment of people of color. Emboldened by The Times’ first newsroom union contract, staff members have openly chastised senior editors for allowing racial disparities to persist.

“We all saw the river of white people coming into your office,” staff writer Esmeralda Bermudez said in a voice sometimes breaking with emotion, while directing one of the strongest critiques at Pearlstine and his hiring practices. Bermudez and others said that The Times missed chances to hire or retain staff members of color even as it embarked on a hiring spree in the initial period after Soon-Shiong’s purchase.

“We have work to do to convince you that this is just the beginning,” Pearlstine said. “It’s a great opportunity to fix things that have been wrong for a long time.”

“Our entire industry is going through this reckoning: How do we root out the anti-Black racism from our organization and from our coverage?” L.A. Times Deputy Managing Editor Shani Hilton said in an interview. “How do we stop the tides of white supremacy that invade, not only what we do, but all of society?”

At The Times, years of ownership turmoil, a revolving door of managers, hundreds of staff cuts and a protracted bankruptcy process a decade ago reinforced an internal hierarchy that put people of color at a disadvantage. It created a tiered newsroom, where veteran editors and reporters, who are largely white, have relied on a secondary class of primarily younger, less-experienced Latino, Asian and Black reporters who are paid significantly less than older counterparts, internal critics said.

The Times newsroom employs 502 journalists, but it is 61% white, even though Los Angeles County’s population is 26% white, according to 2018 census information. Latinos represent just 13% of the newsroom in a county where Latinos make up nearly half of the population. The paper’s composition of Asian American journalists mirrors the county’s population at nearly 15%. But the paper has just 26 Black journalists — 5.2% of its staff — while nearly 8% of county residents are Black.
Posted 1:20:00 AM