Americans Believe They Are Misunderstood By News Media 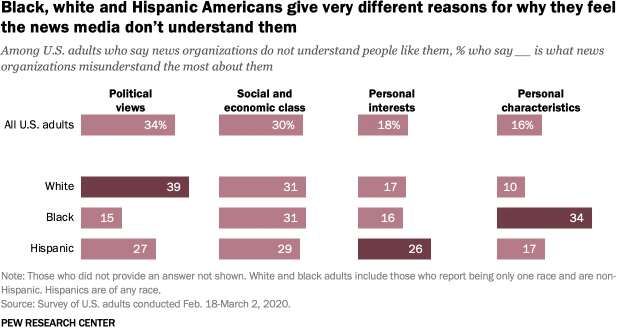 Nearly 6 in 10 Americans said in a new poll that they believe news organizations "do not understand people like them."

The Hill reports the findings from the non-partisan Pew Research survey released Thursday include similar results across racial lines, with 58 percent of Blacks, 55 percent of Hispanics and 61 percent of whites agreeing with the statement.

Pew notes that while the percentages are similar, "adults differ when it comes to their views of why the media doesn’t understand them."

"For example, Black Americans are far more likely than the other two groups to feel that the misunderstanding is based on their 'personal characteristics,' defined in the survey as demographic traits such as age, race or gender," reports Pew.

"White Americans, in contrast, are far more likely than the other two groups to say the media misunderstands their 'political views,'" it adds. "Divides also emerge between other demographic groups and by political party when it comes to the question of whether news organizations understand people like them."
Posted 1:30:00 AM