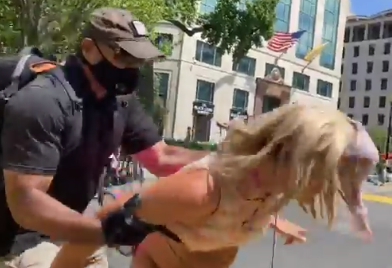 A demonstrator dashed toward NBC News correspondent Andrea Mitchell and Del. Eleanor Holmes Norton, who were standing on the street at Black Lives Matter Plaza in Washington, D.C., on Tuesday, the Washington Examiner reports.

Video taken on the scene shows the demonstrator, who was carrying a megaphone and wearing pink shorts and a purse, running toward Mitchell and the nonvoting Democrat who represents Washington, D.C., in the House of Representatives, while being chased by a man wearing a mask and a backpack.

Mitchell was interviewing Norton when the protester ran by and repeatedly tapped the delegate on the back before being pulled away by the masked man, who was likely some form of security.

After the demonstrator was whisked away, Norton could be heard asking: "Where are the police when you need them?"

Several Black Lives Matter activists and Democratic politicians have called for local governments to "defund the police" amid protests against police brutality and systemic racism. The protests began following the death of George Floyd, a 46-year-old black man who died on Memorial Day after a white Minneapolis police officer knelt on his neck for nearly nine minutes despite his pleas for air.

Norton is introducing legislation in the House to remove the Emancipation Memorial in Lincoln Park. Norton said the statue, which depicts a freed slave kneeling by President Abraham Lincoln, was "problematic."
Posted 1:56:00 AM