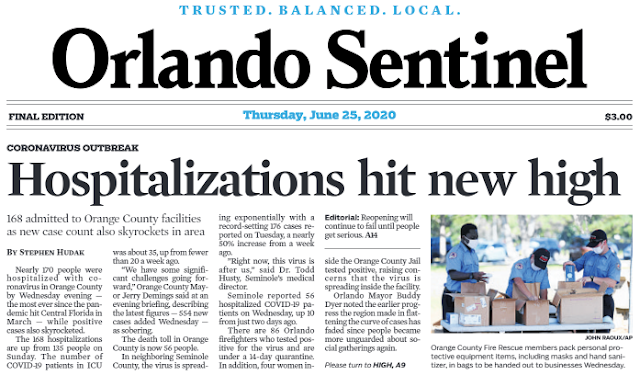 ➤U.S., THREE MOST POPULOUS STATES SET RECORDS FOR NEW DAILY CORONAVIRUS CASES: Amid a surge in coronavirus cases across the South and West, the U.S. and the nation's three most populous states -- California, Texas and Florida -- all reported new coronavirus case numbers Wednesday that set daily records. More than 36,000 new cases were reported for the country, topping the previous one-day record of 34,203 cases on April 25th. California reported 7,149 new cases, far surpassing the previous record from a day earlier of just over 5,000.

Governor Gavin Newsom cited the Bible as he urged mask-wearing, distancing and handwashing, asking state residents to, quote, "love thy neighbors, like yourself, please." Texas reported 5,551 cases yesterday, breaking the record from the day before of 5,489, and Governor Greg Abbott urged people to stay home because, quote, "the spread is so rampant right now." Florida reported a new daily record of 5,511 cases, up 25 percent from its record set last week. Beyond those three states, Arizona is seeing the highest number of new cases per capita of any state. Overall, at least 26 states are seeing a rise in cases compared to the week before. 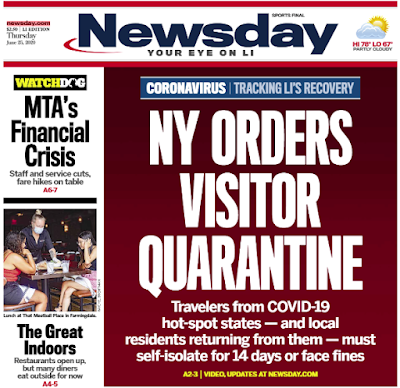 N.Y., N.J., CT Implement Quarantine for Travelers: After beating down their coronavirus outbreaks that were once the worst in the nation, New York, Connecticut and New Jersey yesterday (June 24th) asked that travelers to their states from states that currently have high infection rates quarantine for 14 days after they arrive. It applies to those coming from states with a positive test rate above 10 per 10,000 residents on a seven-day average, or with a 10 percent or higher positivity rate over seven days, and as of Wednesday, those states are Alabama, Arkansas, Arizona, Florida, North Carolina, South Carolina, Utah and Texas.

New York Governor Andrew Cuomo said, "We worked very hard to get the viral transmission rate down, and we don't want to see it go up." Back in March, when New York was the epicenter of the nation's outbreak, Florida and Texas both required travelers from the New York tri-state area to quarantine for 14 days. 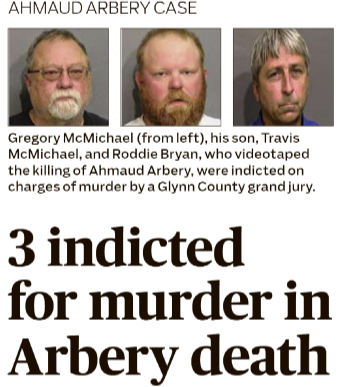 ➤THREE INDICTED ON MURDER CHARGES IN ARBERY'S KILLING: A Georgia grand jury has indicted three white men -- Travis McMichael, Greg McMichael and William "Roddie" Bryan Jr. -- on murder and other charges in the February killing of 25-year-old Ahmaud Arbery, a Black man who was running through their neighborhood, prosecutor Joyette Holmes announced Wednesday. The McMichaels, who are father and son, told police they grabbed their firearms and drove after Arbery when they saw him running through their neighborhood outside the city of Brunswick because they suspected he was a burglar. Arbery's family has said he was out jogging. Bryan said he saw the McMichaels driving by and joined the chase, and it was his leaked cellphone video of Arbery's fatal shooting on May 7th, allegedly by Travis McMichaels, that led to the McMichaels' arrest more than two months after the killing, and then to his arrest as well.

➤APPEALS COURT ORDERS MICHAEL FLYNN'S CASE DISMISSED: A three-judge panel of a federal appeals court ordered in a 2-1 decision yesterday that the criminal case against Michael Flynn, President Trump's first national security adviser, for lying to the FBI be dismissed.

U.S. District Judge Emmet Sullivan had refused to immediately dismiss the case after the Justice Department's extraordinary decision in May to drop the prosecution after Flynn had twice pled guilty. He instead appointed a retired federal judge to argue against the Justice Department’s position and to consider whether Flynn could be held in contempt for perjury. But the appeals court decision said Sullivan overstepped, calling his examination of the request "irregular and searching."

Flynn pled guilty to lying to the FBI about his conversations during the post-election transition with Russia's ambassador about U.S. sanctions on Russia. In requesting the case's dismissal, the Justice Department said the FBI interview with Flynn should never have taken place because his contacts with the ambassador were "entirely appropriate," and also said the lie he told wasn't "material" to an investigation. The retired judge appointed by Sullivan, John Gleeson, blasted the Justice Department's dismissal request, accusing it of creating a pretext to benefit an ally of President Trump.

➤TRUMP SAYS SOME U.S. TROOPS TO BE MOVED FROM GERMANY TO POLAND: President Trump hosted Polish President Andrzej Duda at the White House yesterday, and said that some of the 10,000 U.S. troops he's pulling out of Germany will be moved to Poland. Trump has previously said he will cut the number of troops in Germany from 35,000 to 25,000. Speaking in the Rose Garden, Trump said transferring troops to Poland sends a strong signal against Russian aggression, but also criticized Germany several times, saying it's not meeting its payment pledge to NATO and is buying energy from Russia. Duda's visit was the first by a foreign head of state to the White House since the coronavirus pandemic began.

➤BAYER TO PAY UP TO $10.9 BILLION TO SETTLE ROUNDUP WEEDKILLER LITIGATION: Bayer said Wednesday that it will pay up to $10.9 billion to settle litigation over Roundup weedkiller, made by its subsidiary Monsanto. Thousands of lawsuits have been filed claiming that Roundup causes cancer, and Bayer said the settlement involves about 125,000 claims. Bayer said last year that government regulators haven't found a link between cancer and the Roundup herbicide glyphosate.

➤DISNEYLAND REOPENING POSTPONED: Disney announced yesterday that it's postponing the reopening of Disneyland and its other Southern California theme park, Disney California Adventure, as it waits on guidelines from the state. Disney had planned to reopen them on July 17th. California has said it won't issue guidelines until after July 4th, and Disney said, "Given the time required for us to bring thousands of cast members back to work and restart our business, we have no choice but to delay the reopening of our theme parks and resort hotels until we receive approval from government officials." Disney didn't give a new reopening date. The company indicated it still plans to go ahead with reopening Disney World in Florida on July 11th as scheduled.

➤GNC FILES FOR BANKRUPTCY: Health and wellness company GNC has filed for Chapter 11 bankruptcy protection, and plans to close down 800 to 1,200 of its stores, according to USA Today. GNC also said that it will either reorganize or sell itself. The chain has about 5,200 stores in the U.S. and 7,300 around the world. The company was already burdened with debt and planning to close hundreds of locations before the coronavirus pandemic. GMC began in 1935 as a store selling sandwiches and yogurt in Pittsburgh.

The PGA TOUR, its players and caddies are making an increased commitment to safety measures in an effort to mitigate the risk of positive tests. https://t.co/gbqpU81yzU
— PGA TOUR (@PGATOUR) June 24, 2020


➤PGA TOUR TO BE STRICTER ABOUT CORONAVIRUS, SEVERAL PLAYERS WITHDRAW FROM TRAVELERS: PGA Tour Commissioner Jay Monahan said Wednesday (June 24th) that there will be extra coronavirus testing and stricter monitoring of protocols to prevent the spread of the virus going forward, after three positive tests this week ahead of the Travelers Championship, which begins in Connecticut today. Player Cameron Champ and caddies Ricky Elliott and Ken Comboy have tested positive since arriving at TPC River Highlands for the Travelers. Brooks Koepka has withdrawn from the tournament despite a negative test because Elliott caddies for him. Graeme McDowell also withdrew despite testing negative because Comboy caddies for him. Brooks' brother, Chase Koepka, withdrew, as did Webb Simpson, despite testing negative, after he just won the RBC Heritage on Sunday. Nick Watney was the first player to test positive, doing so last week.

The 2020 New York City Marathon has been canceled due to concerns about the spread of the coronavirus.


➤NEW YORK CITY MARATHON CANCELED: The New York City Marathon was canceled Wednesday (June 24th) because of the coronavirus pandemic, wiping out was supposed to be the 50th anniversary of the world's largest marathon. Organizers and city officials decided that it would be too risky to hold the race, with virus concerns for runners, volunteers and spectators. The marathon had been scheduled to take place on November 1st.
Posted 4:29:00 AM