➤TEXAS GOV. PAUSES REOPENING AS CORONAVIRUS CASES, HOSPITALIZATIONS RISE: Texas Governor Greg Abbott yesterday paused reopening in his state, which was among the earliest to begin to lift the coronavirus shutdowns, as cases of the virus and hospitalizations in Texas continue to rise. Abbott also reimposed a ban on elective surgeries in some places, as hospitalizations more than doubled in two weeks.

In Arizona, another of the Southern and Western states that have been seeing worrisome coronavirus increases, 23 percent of tests conducted over the past seven days have come back positive, nearly triple the national average. There are currently seven states that are seeing more than 10 percent of tests come back positive, the threshold that experts say is concerning. Nevada became the latest state to mandate mask-wearing as its cases rise, with Governor Steve Sisolak ordering that they be worn in public, including in Las Vegas casinos.

Even as cases have been climbing over the past few weeks, the death toll nationally has continued to drop. Experts point to several possible reasons, including: more cases among younger people, who are less likely to get severely sick and die; the development of some treatments; and better infection prevention at nursing homes. There's also a more pessimistic possibility that since deaths usually occur several weeks after infection, the death rate just hasn't started to rise yet.

There have been more than 124,400 deaths as of last night, according to Johns Hopkins University's count, and more than 2,422,000 confirmed cases.

20 Million Estimated Infected: The Centers for Disease Control and Prevention estimated yesterday that 20 million Americans have been infected with the coronavirus since it first arrived in the U.S., some 10 times the 2.3 million confirmed cases. That represents only about six percent of the nation's population, and CDC Director Dr. Robert Redfield told reporters, "It’s clear that many individuals in this nation are still susceptible." The estimate is based on CDC studies of blood samples collected nationwide.

List of Those at Risk for Severe Illness Revamped: The Centers for Disease Control and Prevention has revamped its list of those at high risk of getting severe illness from the coronavirus, creating categories of those at high risk and those who might be at high risk, and making changes that included lowering the obesity threshold, adding pregnant women, and removing those 65 and older as a high risk group.


Analysis: New research explores how conservative media misinformation may have intensified the severity of the pandemic https://t.co/1EXYGQXftM
— The Washington Post (@washingtonpost) June 25, 2020


High Risk: Those at high risk include people with chronic kidney disease, chronic inflammatory lung disease, obesity, serious heart conditions, sickle cell disease, Type 2 diabetes, and weakened immune systems because of organ transplants. The threshold for high risk from obesity was lowered from a body mass index of 40, which is severe obesity, down to 30, the lowest BMI that crosses into obesity from being overweight. The CDC also said people are at increasing risk of severe illness as they get older, but removed people 65 and older as a high risk group.

Might Be at High Risk: Those who might be at high risk include pregnant women, smokers, and those with asthma, high blood pressure, diseases that affect blood flow to the brain, cystic fibrosis, dementia, liver disease, scarred or damaged lungs, Type 1 diabetes, the blood disorder thalassemia, and people who have weakened immune systems, including from HIV.

1.48 Million File for Unemployment: The Labor Department reported yesterday that 1.48 million Americans filed first-time unemployment claims last week. That's down 60,000 from the week before and marks the 12th straight week it's dropped. Additionally, the number of continuing unemployment claims fell to 19.5 million, the first time it's been below 20 million in two months. However, it's also the 14th week there have been more than one million new claims, when the record before the pandemic had been 695,000.

➤HOUSE PASSES SWEEPING POLICE REFORM LEGISLATION: The Democratic-led House passed sweeping police reform legislation Thursday in the wake of weeks of protests following the death of George Floyd. But Republicans contend the bill goes too far, and just three GOP House members voted for it. Senate Majority Leader Leader Mitch McConnell said the measure won't pass in the Republican-led Senate, and President Trump's administration said he would veto it. A police reform measure in the Senate led by the Republican majority stalled this week, with Democrats saying it didn't go far enough. There is a basis for compromise, with both bills sharing common elements, including the creation of a national database of use-of-force incidents.They would also restrict chokeholds and set up new training procedures. But the Democratic legislation also includes limiting legal protections for police, and limiting the sending of military equipment to police.

➤COLORADO GOV. ORDERS REOPENING OF PROBE INTO DEATH OF ELIJAH MCCLAIN IN POLICE CUSTODY: Colorado Governor Jared Polis yesterday ordered the state's attorney general to reopen the investigation into the death of Elijah McClain, a 23-year-old Black man who died in police custody last August after having been put in a chokehold. The probe could potentially lead to the prosecution of three white officers who'd previously been cleared in McClain's death.

Polis said, "Elijah McClain should be alive today, and we owe it to his family to take this step and elevate the pursuit of justice in his name to a statewide concern." Police in Aurora had responded to a call about a "suspicious person" wearing a ski mask and waving his arms as he walked down the street. Police said McClain refused to stop walking and fought back when officers confronted him and tried to arrest him. McClain repeatedly sobbed and begged to be let go, saying at one point, "You guys started to arrest me, and I was stopping my music to listen."


An executive order by Governor Polis in Colorado has been Issued for the Investigation of #ElijahMcClain. Please copy and Re-Tweet! pic.twitter.com/pti7ui9vJC
— Say Their Names 5280 (@SMoKeeGyRL) June 25, 2020


One of the officers put him in a chokehold that cuts off blood to the brain and he was on the ground for 15 minutes as officers and paramedics stood by, before paramedics gave him the sedative ketamine to calm him down. McClain suffered cardiac arrest on the way to the hospital and was taken off life support three days later after being declared brain dead. McClain’s sister, Samara McClain, told The Denver Post that her brother was walking to the store to get iced tea for a cousin, and he often wore masks when he was outside because he had anemia and it caused him to get cold easily.

➤CHARGES FILED AGAINST NYC OFFICER WHO USED CHOKEHOLD: Prosecutors filed criminal charges yesterday against a New York City police officer who was seen on cell phone video using a chokehold on a 35-year-old Black man last Sunday, causing him to lose consciousness. Officer David Afanador pled not guilty to charges of strangulation and attempted aggravated strangulation and was released on bail. He could be sentenced to up to seven years behind bars if convicted. Afanador’s lawyer said his client was facing a rush to judgment in the wake of the protests following George Floyd's death. Afanador hs been suspended without pay. The officers were responding to a 911 call about three men harassing people and throwing objects at them. Body camera video shows three men arguing with police and one of them approaching the officers and saying, "You scared?" before an officer tackles him.


We're thrilled to share Splash Mountain at @Disneyland & @WaltDisneyWorld will be completely reimagined with a new story inspired by an all-time favorite @DisneyAnimation film, “The Princess and the Frog.” Learn about what Imagineers have in development: https://t.co/HyKfdDSH3j pic.twitter.com/DV6476KAVX
— Disney Parks (@DisneyParks) June 25, 2020 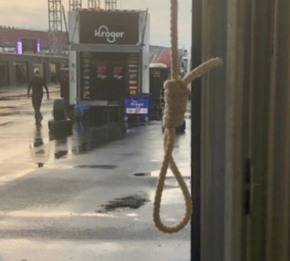 ➤NASCAR RELEASES PHOTO OF ROPE IN WALLACE'S GARAGE STALL, SAYS 'THE NOOSE WAS REAL': NASCAR officials released a photo yesterday of the rope that was found hanging in the Talladega Superspeedway garage stall of Bubba Wallace, NASCAR's only Black driver, with President Steve Phelps saying, "As you can see from the photo, the noose was real, as was our concern for Bubba. . . . It’s our responsibility to react and investigate, and that’s exactly what we did."

NASCAR asked the FBI to investigate after the rope was found last Sunday, but agents quickly determined the rope had been hanging there since last October, so it wasn't a hate crime against Wallace. NASCAR released the photo after getting criticism that it had overreacted. Phelps also said NASCAR asked every track to check their garages this week, and out of 1,684 garage stalls at 29 tracks, only 11 had a garage door pull-down rope tied in a knot, and the only one tied as a noose was the one found in Wallace's stall. Phelps said NASCAR's investigation is over, and that cameras will be put in garages from now on.

➤NFL CANCELS HALL OF FAME GAME: The NFL yesterday canceled the Hall of Fame game that traditionally opens the preseason because of the coronavirus pandemic. The exhibition game was to be played on August 6th between the Dallas Cowboys and the Pittsburgh Steelers in Canton, Ohio. The NFL also said it's postponing the 2020 induction ceremonies for a year, with the ceremony to be held in August 2021.

➤KENTUCKY DERBY TO BE RUN WITH SPECTATORS: Churchill Downs officials announced yesterday that the Kentucky Derby will be run with spectators in the stands on its rescheduled date of September 5th. While they were able to get approval to have spectators, there will be strict guidelines for reduced crowd capacity. Fans will also be encouraged to wear masks, practice social distancing when possible, and wash or sanitize their hands frequently. Because of the revamping of the schedule due to the coronavirus pandemic, the Derby, which is traditionally the first of the Triple Crown races, is going second. The Belmont Stakes, which is usually the last race, was run first last weekend, with favorite Tiz the Law winning, and the Preakness, which is usually held second, will go last this year on October 3rd.


➤NBA'S VINCE CARTER ANNOUNCES RETIREMENT AFTER 22 YEARS: Vince Carter officially announced his retirement yesterday (June 25th) after a record 22-year NBA career, the longest in league history. The news wasn't a surprise, since the 43-year-old Carter had said repeatedly during this season that it would be his last. Carter appeared in 1,541 games, third-most all-time behind Robert Parish and Kareem Abdul-Jabbar, and played for Toronto, New Jersey, Orlando, Phoenix, Dallas, Memphis, Sacramento, and Atlanta for his final two seasons. He scored 25,728 career points, 19th in NBA history.
Posted 4:33:00 AM