The Rundown: U-S Has Most COVID-19 Cases In The World

➤WHO REPORTS LARGEST SINGLE DAY GLOBAL INCREASE IN CORONAVIRUS CASES: The World Health Organization reported the largest single-day increase in coronavirus cases globally on Sunday, more than 183,000 new cases in 24 hours. The U.S., with 36,617 new daily cases, was second only to Brazil, which had 54,771 new cases. Experts said the numbers reflect both spreading infection and more widespread testing. Overall, there have been more than 8,700,000 cases around the world, according to WHO and more than 461,700 deaths. The U.S. has the highest number of cases in the world, more than 2,279,000, and the highest death toll, more than 119,900, both according to Johns Hopkins University's count as of last night.

Overall, at least 23 U.S. states are trending upward in new cases compared to last week, and 10 of them had a more than 50 percent increase, according to the Johns Hopkins data. Many of those are Southern states, which were among the first to reopen, and as coronavirus outbreaks are worsening there, officials are saying more young people in their 20s and 30s are testing positive, with the shift younger being seen in states including Florida, South Carolina, Georgia and Texas. Dr. Michael Osterholm, the director of the Center for Infectious Disease Research and Policy at the University of Minnesota, said on NBC's Meet the Press Sunday that because of the increase in cases he now believes the U.S. won't have waves of COVID-19 cases, but it will be, quote, "one very difficult forest fire" that won't slow down in the summer.


➤TRUMP CRITICIZED FOR SAYING HE SAID TO SLOW DOWN TESTING, WHITE HOUSE SAYS WAS JOKING: President Trump was being criticized Sunday for saying at his Tulsa rally the night before that he'd wanted coronavirus testing slowed down. In the remarks, Trump called testing a "double-edged sword," saying, "When you do testing to that extent, you’re going to find more people. You're going to find more cases! So I said to my people, 'Slow the testing down, please!'" The White House said in response to the criticism that Trump was joking. White House trade adviser Peter Navarro made similar comments on CNN's State of the Union yesterday, calling Trump's remark "tongue-in-cheek."


Watch: Peter Navarro dismisses criticism of Trump's comments in Tulsa about how he asked his people to slow coronavirus testing down to limit the number of cases: "Come on. It was a light moment ... a tongue in cheek thing." pic.twitter.com/NDxDbuMLeU
— TV News HQ (@TVNewsHQ) June 21, 2020

But House Speaker Nancy Pelosi said in a statement, "The American people are owed answers about why President Trump wants less testing when experts say much more is needed." She stated, "The President’s efforts to slow down desperately needed testing to hide the true extent of the virus mean more Americans will lose their lives."

➤NYC OFFICER SUSPENDED FOR USING APPARENT CHOKEHOLD: A New York City police officer was suspended without pay Sunday after he appeared to put a black man in a chokehold in an incident from the same morning in Queens that was caught on cellphone video. Police Commissioner Dermot Shea said immediate action was necessary while the incident, which he called "disturbing," is investigated. Video shows several officers restraining the man on his stomach with one of them appearing to have his arm wrapped around the man's neck. A bystander can be heard saying, "Stop choking him." The man was arrested and his public defender said late in the day that he was hospitalized. NBC News cited a source as saying officers were responding to a 911 call about three man harassing people and throwing objects at them. They tried to detain the man after he approached them with a bag. Body camera video shows three men arguing with police before the apparent chokehold. One of them approaches the officers and says, "You scared?" before one of the officers appears to tackle him. A New York state law signed this month requires criminal charges against an officer if a chokehold leads to injury or death, and the New York City Council passed a law last Thursday criminalizing the use of a chokehold.

➤BRITISH POLICE SAY STABBING ATTACK THAT KILLED THREE WAS TERRORISM: Police in Britain said Sunday that a stabbing attack in a park in the town of Reading that left three people dead and three seriously wounded Saturday evening is being considered a terrorist attack, although the exact motive isn't clear. The 25-year-old suspect was taken into custody within minutes. Police haven't identified him, but British media outlets have said he is a Libyan man named Khairi Saadallah who is seeking asylum and lives in Reading. The BBC reported that he was investigated by British security services last year over concerns that he planned to travel overseas to join a jihadi group, but he wasn't determined not to be a major threat. One witness said groups of people were sitting on the grass in Forbury Gardens park when the attacker, quote, "walked through, suddenly shouted some unintelligible words and went around a large group of around 10, trying to stab them."


➤THEODORE ROOSEVELT STATUE TO BE REMOVED FROM MUSEUM OF NATURAL HISTORY: A statue of former President Theodore Roosevelt will be removed from the entrance to New York City's American Museum of Natural History, where it has stood since 1940. The bronze statue shows Roosevelt on horseback with an African man on one side and a Native American man on the other. Mayor Bill de Blasio said Sunday that because the city owns the building and property, the museum went to the city to discuss removing the statue, quote, "because it explicitly depicts black and indigenous people as subjugated and racially inferior." De Blasio said the city supports the museum's request. However, museum president Ellen Futter made clear to the New York Times that their issue isn't with Roosevelt himself, but with the statue's depiction. Roosevelt's great-grandson Theodore Roosevelt IV is on the museum's board of trustees, and supports the decision, saying, "The composition of the 'Equestrian' statue does not reflect Theodore Roosevelt's legacy." 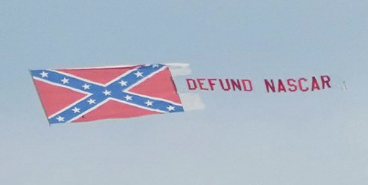 ➤NOOSE FOUND IN STALL OF NASCAR DRIVER WALLACE AT TALLADEGA: A noose was found in the garage stall of Bubba Wallace, the only Black driver in NASCAR's elite Cup Series, at Talladega in Alabama Sunday, where a race was set to be held before being postponed to today because of rain. NASCAR launched an investigation and said in a statement, "We are angry and outraged, and cannot state strongly enough how seriously we take this heinous act. . . . this act only strengthens our resolve to make the sport open and welcoming to all."


The incident happened less than two weeks after Wallace pushed NASCAR to ban the Confederate flag at races. Wallace called the incident a "despicable act of racism and hatred" in a tweet in which he also said, "This will not break me, I will not give in nor will I back down. I will continue to proudly stand for what I believe in." Cars and pickup trucks drove along roads near the Talladega racetrack and past the entrance Sunday flying the Confederate flag in a form a protest of the flag decision, and a small plane flew over pulling a banner than said, "Defund NASCAR."
Posted 4:35:00 AM