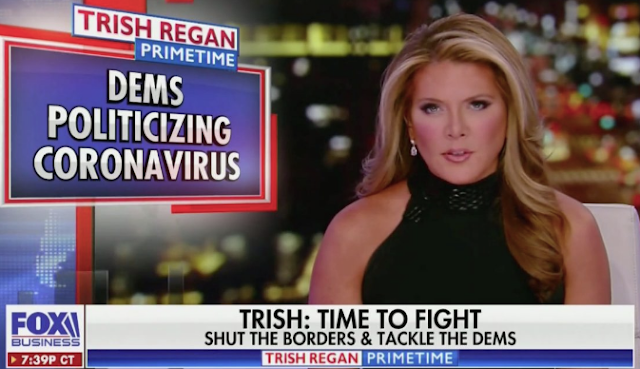 The Fox Business anchor Trish Regan has departed the cable news network, two weeks after she was benched following an on-air monologue in which she dismissed concerns about the coronavirus as a “scam” fueled by enemies of President Trump.

The NY Times reports the network said on Friday that it “has parted ways” with Ms. Regan, whose prime-time program was abruptly pulled from the channel’s schedule earlier this month.

In a statement of her own that was distributed by the network, Ms. Regan, 47, wrote that she was looking forward to “this next chapter” of her career. “I have enjoyed my time at Fox and now intend to focus on my family during these troubles times,” she wrote.

Conservative media stars have faced intense scrutiny after many played down fears about the coronavirus, assuring millions of Americans that concerns about the illness had been overhyped by Democrats and journalists intent on undermining Mr. Trump.

Ms. Regan’s remarks, on her March 9 program, were singled out as misleading and reckless, including by many of her colleagues at Fox Business and its corporate sibling, Fox News. On air, she accused liberals of rooting for a market collapse and trying to “demonize and destroy the president” in front of a graphic reading, “Coronavirus Impeachment Scam.”

Regan had been a notable part of the Fox Business team since joining in March 2015, after stints at Bloomberg, CNBC and CBS News.
Posted 3:35:00 AM