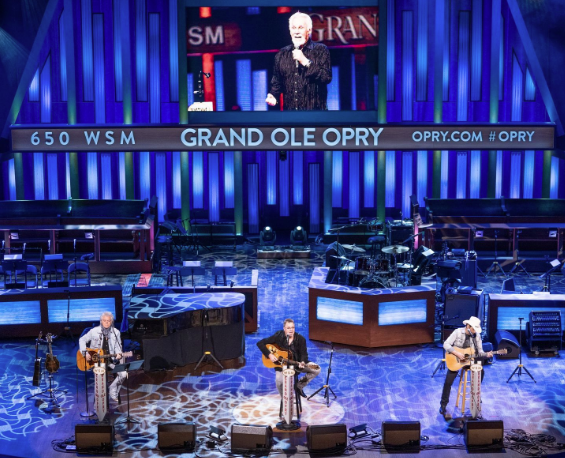 Grand Ole Opry members Vince Gill, Brad Paisley and Marty Stuart kept the circle unbroken and the music playing for fans around the world tuning in to the 4,916th consecutive Saturday night broadcast of the Opry, according to CMT.com.

Throughout the night, the three Opry members sat at a CDC-recommended social distance, playing for a minimal crew in the Opry House and for fans around the globe. Accompanying each other on their acoustic instruments, the three swapped stories and songs, including Gill’s “Go Rest High on That Mountain,” Stuart’s “Hobo’s Prayer” and Paisley’s “Mud On The Tires,” among others.

Gill opened the show with an emotional performance of “Sweet Music Man,” written by and recorded by Kenny Rogers, as a tribute to the music legend who passed away Friday night. Gill said it was “one of my favorite songs Kenny ever did.”

Amid current COVID-19 concerns, the Opry, the world’s longest-running radio show, has paused all shows with a live Opry House audience through April 4. During this time, however, the Opry has pledged to continue live Saturday night broadcasts without an audience in attendance.
Posted 1:06:00 AM