Inspired by Italians singing from their balconies in solidarity against the coronavirus, Chicagoans also stuck inside created a very American version Saturday night, belting out Jon Bon Jovi’s “Livin’ On A Prayer” together online and in person.

Even Bon Jovi himself weighed in, posting an Instagram video and telling Chicago he was with them.

As the clock struck 7 p.m., the lyrics of the now karaoke classic echoed through the Rogers Park apartment courtyard and across the area, belted out by social distance-practicing Chicagoans. Gov. JB Pritzker on Friday ordered everyone in the state to stay at home beginning at 5 p.m. Saturday unless they have jobs categorized as essential.

Hubbard Radio's WDRV 97.1 The Drive got in on the Chicago phenomenon playing “Livin’ On A Prayer” right at 7 p.m. to provide the soundtrack.   The station posted on the singalong’s Facebook event page: “You guys are awesome. Just want to let everyone know that our music director at 97.1 The Drive changed the music library tonight so that Livin’ on a Prayer will play promptly at 7pm :)” 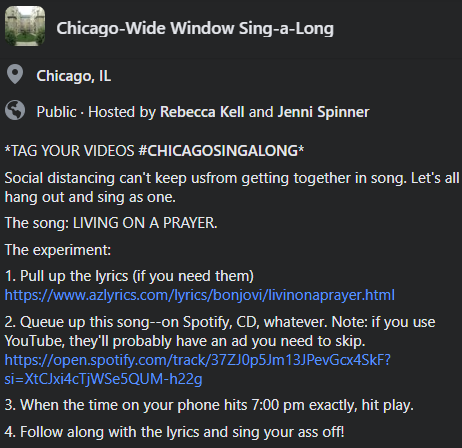 Spinner and Kell created the event after seeing the viral videos of Italians singing from their balconies amid the coronavirus outbreak. At their apartment building, once neighbors started singing, others joined in from different units. As the final chorus hit, one neighbor even began tossing rose petals out of the window while singing.

In Dallas, it was a Lean On Me sing-a-long.

Residents of South Side on Lamar, a group of residents in anan apartment building in Dallas stuck their heads out of windows in a chorus of quarantined voices.

Little by little, other residents began to join Barber in his refrain, some adding harmonies, some just peering out their windows or filming on phones. Others came in a bit off-beat or off-key — the perils of cross-apartment singing.

Curry said she was inspired by the videos she saw of Italians in quarantine singing to one another from the balconies of their buildings. Since Italy announced a country-wide lockdown in response to the coronavirus outbreak, videos of quarantine singalongs have begun to circulate social media. Italy now has more than 50,000 confirmed cases and nearly 5,000 deaths from COVID-19.

"When I saw the video of them singing from window to window to encourage each other, I realized I live in a building that has lots and lots of windows," said Curry. "I think we could all use a bit of encouragement right now."

So Curry decided to organize something similar at the South Side on Lamar apartment building, a former Sears warehouse. She chose "Lean on Me" as the song for its universality and, of course, its timely message.
Posted 1:11:00 AM