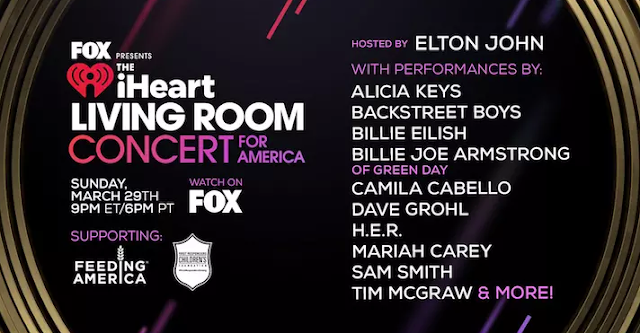 “This is something completely different than we’ve ever tried before,” explained iHeart Media president of entertainment John Sykes, who is hard at work putting together “FOX Presents the iHeart Living Room Concert for America” that will air on Sunday night.

When Sykes and iHeart Media chief programming officer Tom Poleman began reaching out to artists, asking them to partake in the “Living Room Concert for America,” they emailed Elton John and asked him to perform.

“We were surprised to get an email back, the next day, saying, ‘Hey, how about I host?’ We would like to take credit for going to him as a host, but it was Elton’s idea,” Poleman told Fox News.

Sykes and “Jingle Ball” pioneer Poleman have produced some elaborate events during their careers but the logistical issues surrounding the ‘Living Room Concert’ are unprecedented.

It all started when the “iHeart Radio Music Awards,” originally scheduled to air Sunday night on FOX, were postponed due to the coronavirus pandemic. Execs quickly huddled to figure out an alternative.

Sykes said they wanted to create a fundraiser to raise not only cash, but also awareness for the “incredible work being done by first responders” who represent the “strength and compassion” of America.

“Part of the reason why we couldn’t do an [awards] show is because everybody’s stuck in their living rooms. So how do you make the most out of being stuck in your living rooms? Let’s do a concert where we’re all connected via living rooms,” Poleman said.

“We did a quick pivot… started calling artists at their homes,” Sykes said.

Poleman, who has even more big-name musicians reaching out to him trying to get involved, is grateful that FOX offered for the concert to be commercial-free so that he can fit as many performances as possible. And it seems like they’ll need every available minute, as additional performers will be announced leading up to Sunday’s show.

“Artists are coming in like crazy. From all around the world, we’re getting phone calls from people who want to support it,” he said. “It’s amazing when Americans, and really the world, get our back up against the wall, we really shine brightest.”
Posted 4:58:00 AM