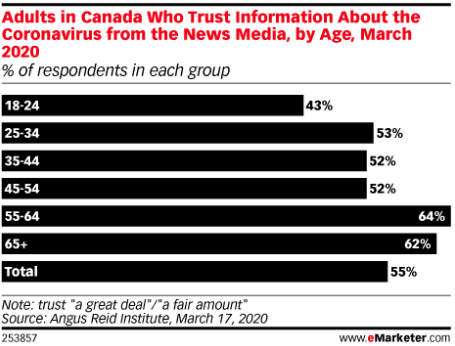 According to an Angus Reid Institute poll conducted between March 13 and 15, just more than half (55%) of adults in Canada had a “fair or great deal of trust” in the news media for outbreak information. However, trust is up slightly from the same survey conducted a week before (March 5 and 6), when it was 45%.

Older respondents showed more trust than younger groups: Almost two-thirds of Canadians ages 55 and older trusted the news media vs. fewer than half of 18- to 24-year-olds. The most trusted source of COVID-19 information for all ages was a “local health authority/medical health officer,” cited by 87% of respondents. 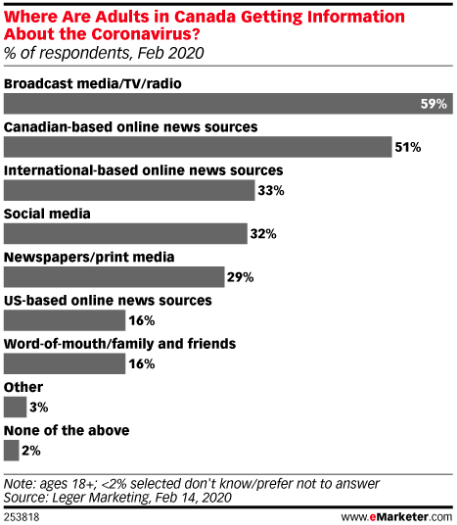 Most Canadians turn to traditional formats like broadcast TV and radio for the latest pandemic information. According to a Leger Marketing poll from February, 59% of adults in Canada said they turned to TV and radio for COVID-19 news, followed by Canadian-based online sources (51%). Ranking well below were international online news sources (33%) and social media (31%).

A positive sign for broadcast media is that Canadians are significantly increasing their TV news viewership to stay informed during the pandemic. According to Numeris ratings reports, viewership of national news programs was up substantially among individuals in Canada ages 25 to 54 between March 13 and 15. All major daily TV news programs nearly doubled their year-to-date average minute audience (AMA) during that period.

Consumption of digital news media in Canada is also much higher in recent weeks. According to Comscore Media Matrix website tracking from March 9 to 15, traffic on news and information sites was substantially increased vs. a benchmark week in early January 2020. A 19% jump was seen in aggregate unique daily visitors and total visits.
Posted 1:52:00 AM