As the entire U.S. population is turned upside down by the COVID-19 crisis, disrupting nearly every pattern of ‘normal’ life, it is crucial that the broadcast radio industry has access to correct information regarding where it stands today.

Periodically, Edison Research has released its estimate of what portion of all listening to AM/FM content happens on a traditional radio receiver and how much is done on a digital device.

As of the most recent update, Q4 2019, the portion of AM/FM listening represented by the streams is 8%. “Traditional” radio listening through a receiver like a car radio or clock radio is 92% of all listening. 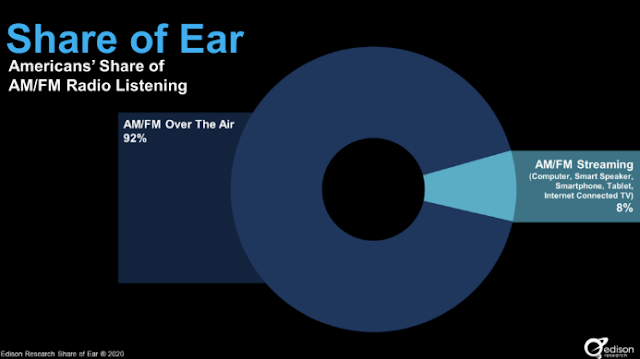 “We’ve been tracking the changes in radio listening since the beginning of Share of Ear in 2014. The portion of listening that is digital goes up a tiny bit with each update, but the total amount remains small,” says Larry Rosin, President of Edison Research. “Streaming is a bigger factor for spoken-word stations such as public radio news, sports and news talk.”

“Determining shares like these can’t be done in a simple manner,” continued Rosin, “you have to put in the work. You need a methodology that takes time spent listening into account, and you need to fully represent the American population, including not only those online but also those who are either not online or lightly online.”

Edison’s Share of Ear® study is the only research that measures the entire world of audio, looking at platform of listening, time of day, device on which the audio was consumed, the kind of programming, and the location of listening. The study will continue to measure the audio space and perhaps will show that the current crisis is indeed bringing changes.

“President Obama’s then chief of staff Rahm Emanuel is credited with coining the aphorism: ‘Never let a serious crisis go to waste.’ If the radio industry is ever going to really ‘turn the corner’ on digital listening, this may need to be the crisis that makes it happen. Radio needs to do all it can to remind listeners that they still can listen, on smart speakers, through phone apps, and their computers,” says Rosin.
Posted 4:08:00 AM