Edison Research and Triton Digital last week released the The Infinite Dial, a survey of Americans 18+ and their use of radio, digital audio social and other digital media that first launched 22 years ago.

While the news headlines tend to focus on the growth of podcast and smart speakers, dig a bit deeper to find a very interesting and promising narrative about radio one might pull out of the data, according to BIA Advisory Services.

The Infinite Dial 2020 clearly tells us where consumers are spending their audio time, and it’s radio.

Especially in the car. Based on the chart below, we can see that radio’s biggest competitor in the car is not Sirius/XM (trending down), podcasting (very low single digits) or even online audio (hovering just over 10%). The biggest share loser was radio from 2017-2020, and the biggest share gainer was owned music. Radio is competing with its own listeners more so than other media. 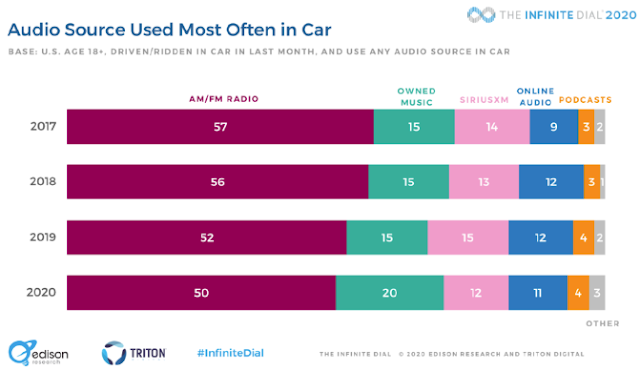 Take-away #1: Radio can constructively disrupt their audience experience to tap into the unmet audience needs that audiences are having to satisfy themselves, not with broadcast, online audio or podcasting.

This could be a path to material growth for radio. And given the huge platform of being the most used audio source in the car by 50% of the audience, it’s radio’s opportunity to lose.

A second remarkable trend brings us inside the home. While radio owns the car, it’s in fast decline on the home front. From 2008 to 2020, the average number of radios in the home declined 50% from 3.0 to 1.5. The number of households with no radios increased from 4% to 32%. This begs the question: Should radio give up the household and focus on the car for its last stand in the audio market? No. The new “radio” in households in 2020 is the smart speaker.

Take-away #2: If you have a platform advantage, scale it.

The smart speaker is the new household radio in 2020, but for half the audience. The other half inevitably will follow the same path of fewer radios and more smart speaker penetration. But for now, the radio industry has two paths into the home – radios and smart speakers. No one else has that platform advantage.
Posted 4:09:00 AM