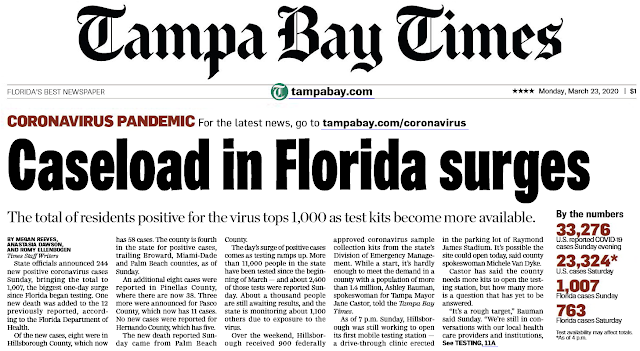 Gov. Ron DeSantis will require anyone on a flight from the New York City area to self-isolate for 14 days upon arriving in Florida in an effort to control the spread of coronavirus, he announced late Monday.

In his most drastic move yet, DeSantis will make it a criminal penalty for anyone on those flights to violate the quarantine order. The order applies to all people whose points of departure originate from New York, New Jersey or Connecticut. It takes effect at 12:01 a.m. on March 24.

With more than 20,000 cases, New York leads the nation in the number of people infected with the virus.

“I would reckon, given the outbreak there, that every single flight has somebody on it who is positive for COVID-19,” he said.

On Monday, there were 190 direct flights to Florida from the New York and New Jersey area, he said.

The unprecedented measure is in response to President Donald J. Trump’s refusal to halt domestic travel, DeSantis said. The governor, a close ally of the president, has been asking Trump to limit flights to Florida for more than a week, most recently on Sunday night, DeSantis said.

“That’s the only way we can be sure the virus isn’t going to be reintroduced to the state of Florida,” DeSantis said.

But DeSantis conceded that his order will filter only air travel. Florida isn’t putting any restrictions on people driving into the state with New York license plates. DeSantis said that people in cars aren’t exposing strangers to any kind of contagion the way they might on a plane and there was no obvious way to stopping them. Still, it’s unclear how many New Yorkers would still be allowed to enter Florida under that exception.

DeSantis announced the new restriction during an unusual news conference in Tallahassee that was announced the minute it started, preventing most reporters from attending. A handful of television reporters, whom DeSantis frequently calls on first to ask friendly questions at his news conferences, were apparently given advanced notice to gather in his office at the Capitol.
Posted 1:40:00 AM