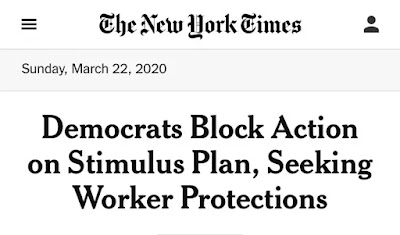 President Trump ripped The New York Times on Monday for repeatedly changing a headline on an article regarding a trillion-dollar coronavirus relief package "to satisfy the radical left," calling the modifications "corrupt" and "dangerous" for the U.S.

"The New York Times changed headlines 3 times in order to satisfy the Radical Left. What should have been a good story got 'worse & worse', until the headline alone made it very unfair," the president tweeted. "Fake & Corrupt News that is very dangerous for our Country!"


.@nytimes, how many times does @SenSchumer and @SpeakerPelosi get to re-write your headline? pic.twitter.com/lB679yN3vZ
— Red Nation Rising (@RedNationRising) March 23, 2020


The coronavirus stimulus package, which is designed to help offset potentially catastrophic economic impacts of the virus, is still being negotiated after Senate Democrats blocked a procedural vote on the measure late Sunday.
Posted 1:42:00 AM