Radio Needs To Be The “Work From Home Station”

The COVID-19 pandemic has upended listeners' lifestyles and very likely their terrestrial radio listening along with it, according to NuVoodoo Research (See the latest results of their  Coronavirus tracking study here)

NuVoodo VP/Marketing Mike O'Connor writes past webinars have broken out in great detail how much upside there has been for radio stations focusing on full-time workers at their place of business during normal times. "When we look at the top quin-tiles of daily listening duration and occasions across the week, the average-quarter hours that could be racked up as the result of such efforts were staggering."

According to O'Connor, left unaddressed, the possibility for a listening sea-change among full-time workers is quite real. 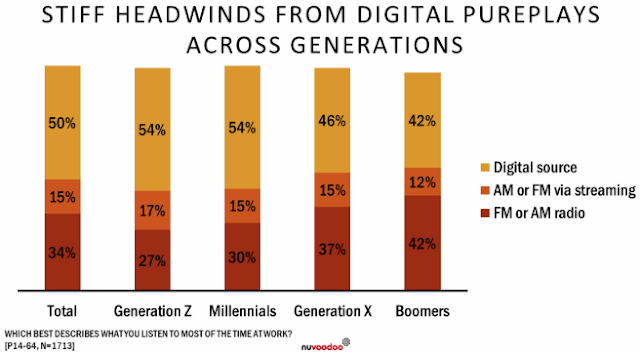 "According to our recent Ratings Prospect Study, while the appetite for audio entertainment during the workday remained at an all-time high among working age adults 25-44, the pre-crisis trend toward digital alternatives was already a significant headwind for terrestrial radio’s at-work listenership. Only when we parsed our nationwide survey data to include the subset of workday audio consumers likely to participate in the radio ratings were we able to identify a very narrow edge for terrestrial radio over online digital audio competition." 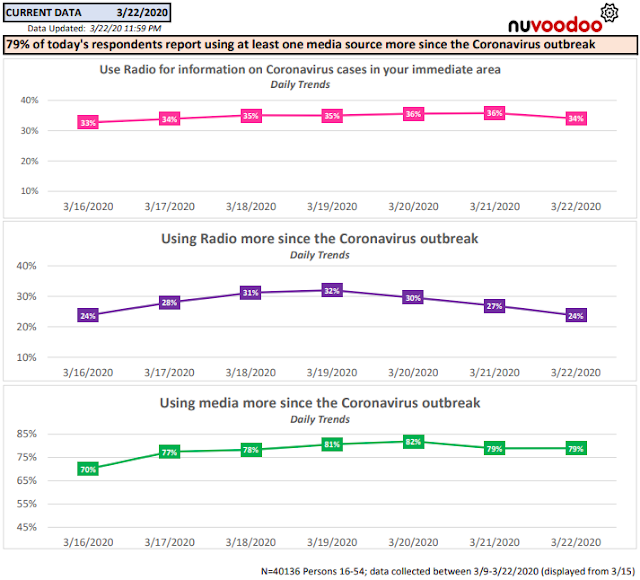 O'Connor continues with workers either displaced to the home office or worse yet, out of a job altogether, radio’s workday AQH windfall is in jeopardy, even despite Nielsen’s methodological skew in radio’s favor.

He offers several opportunities for radio:
The initial shock at the prospect of long-term home confinement will likely evolve to begrudging acceptance as reality sets in. Stations which engage the audience off-air and create listening occasions during the workday are the ones likely to emerge with shares intact.

NuVoodoo continues tracking the opinions of around 3,000 radio listeners around the country each day to determine what content is essential for radio stations to embrace.

NuVoodoo will provide updated findings and a deeper dive into what it means for radio during today's webinar at 2pm Eastern. Interested stations can participate in today's webiner by signing-up here.
Posted 2:09:00 AM