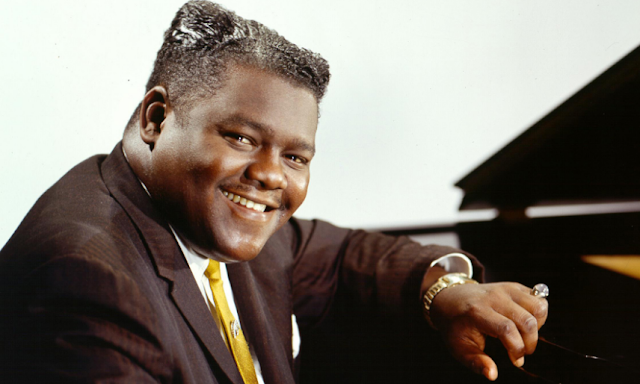 Fats Domino, the amiable rock ‘n’ roll pioneer whose steady, pounding piano and easy baritone helped change popular music even as it honored the grand, good-humored tradition of the Crescent City, has died.

At least in appearance, Domino was no Elvis Presley. He stood 5-feet-5 and weighed more than 200 pounds, with a wide, boyish smile and a haircut as flat as an album cover. But Domino sold more than 110 million records, and his 22 million-selling singles included “Blueberry Hill,” ″Ain’t It a Shame” and other rock ‘n’ roll standards.

Domino's debut album, Carry On Rockin, containing several of his hits and tracks that had not yet been released as singles, was issued under the Imperial imprint (catalogue number 9009) in November 1955 and was reissued as Rock and Rollin' with Fats Domino in 1956.[8] The reissue reached number 17 on the Billboard Pop Albums chart.

Domino appeared in two films released in 1956: Shake, Rattle & Rock![10] and The Girl Can't Help It.  On December 18, 1957, his hit recording of "The Big Beat" was featured on Dick Clark's television program, American Bandstand.

Domino had a steady series of hits for Imperial through early 1962, including "Walking' to New Orleans" (1960, Pop number 6), co-written by Bobby Charles, and "My Girl Josephine" (Pop number 14) in the same year.

Imperial Records was sold in early 1963, and Domino left the label: "I stuck with them until they sold out," he said in 1979. In all, he recorded over 60 singles for Imperial, placing 40 songs in the top 10 on the R&B chart and 11 in the top 10 on the Pop chart. Twenty-two of Domino's Imperial singles were double-sided hits. 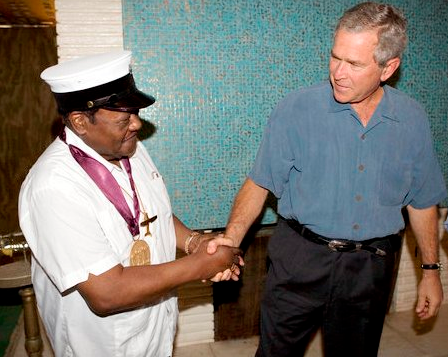 Domino with the National Medal of Arts replaced by President George W. Bush on August 29, 2006, after the original medal, awarded to him by President Bill Clinton, was lost in the floodwaters of Hurricane Katrina.
Posted 10:50:00 AM