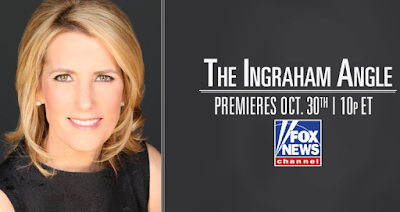 Laura Ingraham was the toast of Fox News on Wednesday evening as the number-one cable news channel hosted a star-studded bash at a steakhouse just across the street from the U.S. Capitol to celebrate the premiere of “The Ingraham Angle” on Monday, October 30, at 10 p.m.

He warmed up the crowd by boasting of Fox News' status as the No. 1 cable news channel. Murdoch said the addition of Ingraham will mean the channel has the most female talent of any news channel, and that with the addition of Shannon Bream's 11 p.m. show, Fox News will be live from 6 a.m. to midnight.

Ingraham promised to hear all sides, and said she was grateful to Murdoch for the opportunity to discuss the nation's issues in the 10 p.m. time slot.

"I've always been home but I really feel like I've come home now," said Ingraham, who was hired as a Fox News contributor in 2007. "Tonight, I am exceedingly grateful ... This is going to be a new exciting chapter."

Ingraham, the most listened-to female talk-radio host in the country and a New York Times best-selling author, has made frequent appearances on Fox News over the past decade. In late July she was approached to host a new show in the prime-time lineup. Sean Hannity's show was moved to 9 p.m., and "The Five" was moved back to 5 p.m. in the reshuffling.

The event caps quite a month for Ingraham, who has been on a promotion tour for her new book on the 2016 presidential campaign, "Billionaire at the Barricades: The Populist Revolution from Reagan to Trump."
Posted 3:13:00 AM