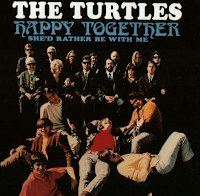 The Florida Supreme Court on Thursday ruled against Flo & Eddie Inc., a company created by the singers, finding Florida common law does not recognize an exclusive right of public performance in pre-1972 sound recordings. According to law.com, that means Sirius XM Radio was not skirting  state law when it broadcast Turtles songs without paying royalties to Flo & Eddie.

“Flo & Eddie essentially asks this court to recognize an unworkable common law right in pre-1972 sound recordings that is broader than any right ever previously recognized in any sound recording,” Justice Charles Canady wrote in a unanimous opinion. “Doing so would require this court to, among other things, ignore the lengthy and well-documented history of this topic — something we decline to do.”

Sirius XM previously settled with Flo & Eddie, which filed class actions in Florida, New York and California on behalf of owners of pre-1972 sound recordings. The settlement, approved by a California federal judge in May, put Sirius XM on the hook for at least $25 million in payments to the class as well as a 10-year license. But the value of the settlement would have been higher if the Florida Supreme Court had ruled in favor of Flo & Eddie.

The question came before the court from Flo & Eddie’s Miami federal case. U.S. District Judge Darrin Gayles in Miami initially ruled for Sirius XM, but the U.S. Court of Appeals for the Eleventh Circuit asked for clarification on Florida law from the state’s justices because there was no case law that directly addressed the issue.

The Florida Supreme Court examined the history of  copyright law, which has long required broadcasters to license songs from the owner of a musical composition, usually the songwriter or publisher. In 1995, federal law began requiring companies like Sirius XM to obtain a license from the owner of the song recording — the performer or the record company — but only for post-1972 song recordings.

The court disagreed with Flo & Eddie’s reliance on a 1943 Florida case involving one magician suing another for copying his public performance. The justices found the case concluded a dramatic composition or intellectual production that is not covered by federal copyright law loses any exclusive right of public performance the moment it’s published.

“Florida common law has never previously recognized an exclusive right of public performance for sound recordings,” Canady wrote. “To recognize such a right for the first time today would be an inherently legislative task. Such a decision would have an immediate impact on consumers beyond Florida’s borders and would affect numerous stakeholders who are not parties to this suit.”

Gersten said he was “very pleased” with the court’s opinion.

“It was well-thought-out,” Gersten said. “Justice Canady did a superb job of addressing everything. As I suspected, the district court judge, Judge Gayles, got it right. I think it really settles the issue in the state of Florida. It gets in line certainly with New York. It’s just a good, common-sense opinion.”

Cortiñas did not respond to a request for comment by deadline.
Posted 3:17:00 AM