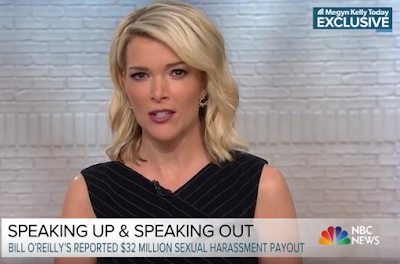 Megyn Kelly says she complained to Fox News about Bill O’Reilly nearly a year ago, but network executives turned a deaf ear to her pleas.

“O’Reilly’s suggestion that no one ever complained about his behavior is false,” the NBC News anchor said Monday on her “Megyn Kelly Today.” “I know be cause I complained.”

The NY Daily News reports the remark came in light of a new report that Fox was aware O’Reilly had recently made a $32 million sexual harassment settlement when it signed him to a four-year renewal worth $100 million.

Kelly, a top Fox News anchor until the end of last year, recounted her own run-ins with O’Reilly and sexual harassment at Fox News.

She recounted for the first time how she emailed then-Fox News Co-Presidents Bill Shine and Jack Abernethy last November after O’Reilly lambasted her on “CBS This Morning” for including a chapter about harassment at Fox News in her recently published memoir.

Shine, who was fired from Fox News in early May, emailed Kelly back to say executives would deal with O’Reilly.

“By 8 p.m that night O’Reilly had apparently been dealt with,” Kelly said Monday during the somber opening of her show. “And by that I mean he was permitted, with management’s advance notice and blessing, to go on the air and attack the company’s harassment victims yet again.”

Kelly said the harassment wasn’t unique to Fox News, and credited the network with making some changes since Ailes’ departure in July 2016. He died this May.

A representative for 21st Century Fox, the network’s parent company, didn’t immediately return a request for comment.
Posted 11:05:00 AM