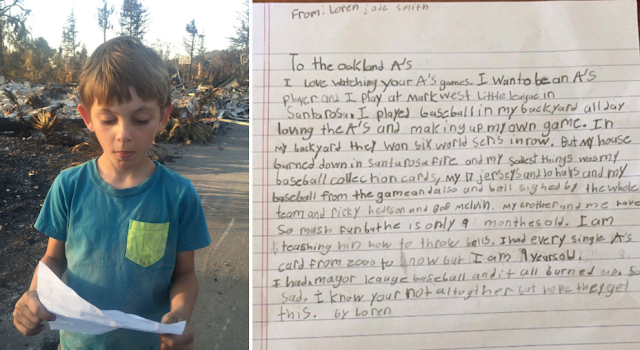 After losing his collection of MLB memorabilia in the Santa Rosa, Calif. fires out West, one young baseball fan is learning the meaning of brotherly love courtesy of one on-air personality at WMGK 102.9 FM.

According to philly.com, longtime morning show host John DeBella will donate more than 1,000 baseball cards to nine-year-old collector Loren Smith, a Santa Rosa, Calif. resident and huge Oakland Athletics fan whose family recently lost everything in a series of deadly wildfires that have devastated Northern California. Among the possessions lost in the fires were Smith’s baseball collectibles, which included rare items like signed jerseys, hats, and cards.

Like most of us, DeBella says he heard about Loren’s story online. Except DeBella managed to do a little more: He tracked down the Smith family to announce his donation to the youngster on WMGK today.

“There are a lot of things you can do in this world, and it’s amazing how easy it is sometimes to make someone else’s life better,” DeBella says. “I was trying to explain to him that he was doing a bigger favor for me than I was doing for him.”

The cards, it turns out, actually come from DeBella’s adult son, who built his own collection as a kid. Now, with his son fully grown, DeBella says he saw the perfect opportunity to help out a kid in need.

“My son has absolutely no desire to own these cards anymore,” DeBella says. “My son is 32, so probably a vast majority of the players in these cards are not only not playing, a lot of them are probably dead.”
Posted 3:03:00 AM