Radio talk show host John DePetro said Friday that he has left WADK-AM in Newport and will be making a “major announcement” on Monday morning at 8:30 about where he is going next.

“I’ll be on the radio Monday,” DePetro said, “just not there.”

DePetro was a talk show host on N/T WPRO 630 AM for 10 years and had been on the air at the Newport station since January. When he signed on at WADK, he said he saw the job as a launching pad for greater things. 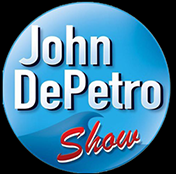 According to The Providence Journal, he departs just short of two weeks after his show was the center of political attention in Rhode Island after state Democratic Party second vice chairman Joseph DeLorenzo made controversial comments about a state representative’s allegations of sexual harassment at the State House.

DePetro said he would make the announcement on his website, depetro.com, and on social media.

While at WPRO, he was twice cited as talk show of the year by the Associated Press. But in 2013, while at WPRO, an organization called For Our Daughters, backed by organized labor, organized a boycott against him after he referred to protesters as “union hags.” He went off the air during that controversy for five weeks.