Radio Sustains Its Dominance Of Audio 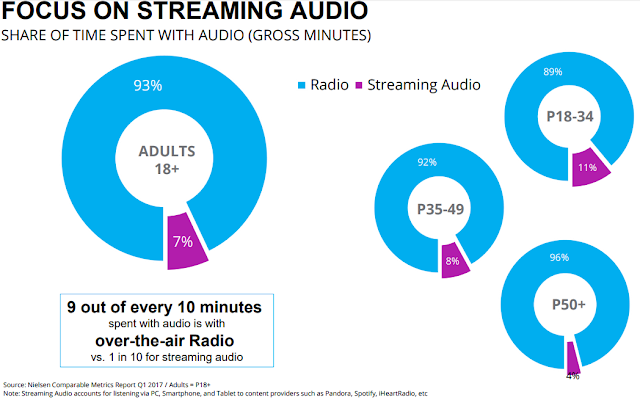 In the decade since the iPhone debuted, the world has been transformed by mobile devices. Despite this ubiquitous adoption of smartphones, AM/FM radio sustains its dominance in the audio space.

What makes AM/FM radio’s continued strength in a mobile age possible? In a single word: Employment. 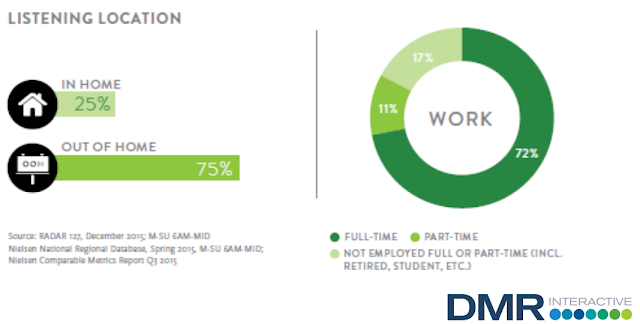 “Everyone in radio can recite statistics about reach, but that’s only part of the story. The ongoing power of radio rests with our employed audience, which consumes enormous amounts of AM/FM radio in the car and at-work. Best of all for advertisers, this audience has money to spend,” said Andrew Curran, President and COO of DMR/Interactive.

When economic headlines mention 5% unemployment rate, the obvious assumption is that 95% of adults are working. By extension, this same logic would indicate that every advertising platform is equally effective at reaching these most sought after consumers. However, according to the Bureau of Labor Statistics, that is simply not the case. 40% of U.S. adults are out of the workforce. That means 150 million Americans work (60%) and 100 million American adults do not.

Heavy listeners of radio are overwhelmingly employed with 85% of consumption among A25-54 being driven by people with jobs. Even on the younger end, among P18-24, approximately 63% of listening across markets and major formats is driven by employed persons.

The reason for this difference in listening isn’t due to smart phones or overly simplified theories about millennials, who are already the largest generation in the workforce, it is because P18-24 are always less employed than their older counterparts. Decade after decade, this younger demographic has never been the driving force behind radio listening.

As station programming super-serves its employed audience, radio sellers need a more compelling story, not just to win ad dollars from other radio stations, but more importantly away from local TV and print.

“The employment angle is compelling, not simply because it’s a long held programming fundamental, but because these are the consumers who advertisers want to target and reach, people with a paycheck and money to spend,” says Doug Smith, Vice President, Marketing Strategy with DMR/Interactive.

As recent natural disasters remind us, radio stations take their unique public service mandate seriously.  A similar public interest obligation can be brought to life by the sales team in terms of radio’s ongoing impact on the local economy. By putting advertisers in direct contact with employed persons, radio’s ability to deliver ROI and help businesses grow, which leads to job creation (and more listening) is enormous.

These employment and consumption insights were recently discussed by Erica Farber, President and CEO of the Radio Advertising Bureau and Andrew Curran from DMR/Interactive on the Radio on Main Street Podcast.
Posted 5:30:00 AM