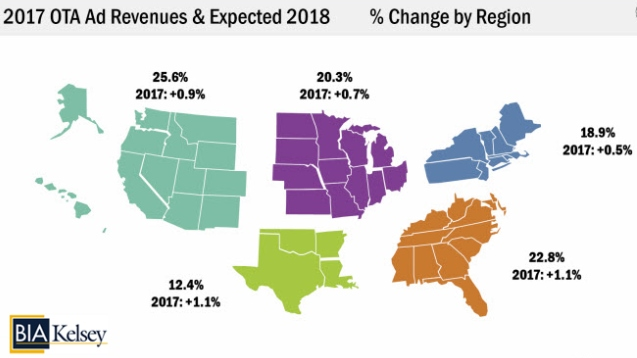 The new numbers are from BIA/Kelsey’s Outlook For Local Advertising report, set to be released next week, according to InsideRadio.

“Even with increased audio competition from many different sources, radio is still a formidable advertising platform, gathering over 10% of local adverting dollars,” BIA/Kelsey senior VP and chief economist, Mark Fratrik, said this week during a webinar presented by the Media Financial Management Association.

Looking ahead to 2018, radio’s combined over-the-air and digital assets are expected to cordon off 10.2% of the $155.6 billion that marketers will spend on local advertising, or $15.87 billion. The lion’s share will go to over-the-air radio, which is forecast to capture 9.2% of local ad dollars with another 1% coming from radio’s digital assets. “There will be some benefit from political advertising for radio in 2018 but not huge,” BIA CEO Tom Buono said.
Posted 9:39:00 AM