As the NFL lurches toward another season of disappointing TV ratings, media executives once again are questioning whether there’s simply too much football, reports Sports Business Daily.

There seem to be dozens of reasons for the ratings downturn, from protests during the national anthem and the continued ratings strength of cable news networks to the concussion issue and weather-related problems.

But one reason increasingly being discussed in media circles deals with NFL oversaturation, a topic that has irked network executives since the league launched NFL Network in 2003.

So far this season, fans have been able to watch games on Thursday nights, Sunday mornings, Sunday afternoons, Sunday nights and Monday nights. Later in the season, games will be available on Saturdays.

In-game highlights are a touch of a button away on a large variety of websites and mobile apps. The league heavily markets the ability to watch condensed versions of games almost as soon as they conclude. 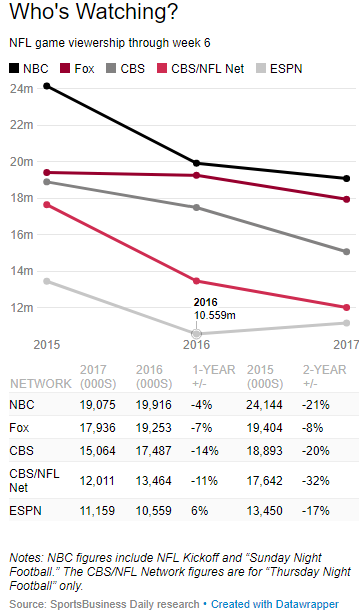 Overall, NFL game viewership this season is down about 7 percent from the same point last season and 18 percent compared with the same point in the 2015 season. More concerning for network executives is the 11 percent across-the-board ratings drop in the 18- to 34-year-old demographic, the biggest drop of any demo.

Network executives were reluctant to discuss NFL oversaturation on the record.