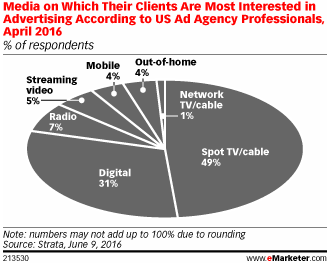 Roughly half of US ad agency professionals said their clients are most interested in advertising on spot TV or spot cable—more than any other medium including digital, mobile, streaming video and radio, April 2016 research revealed.

Media buying and selling software provider Strata surveyed 84 US ad agency professionals who were at the media director level or higher at agencies of varying sizes. When it came down to the advertising media their clients were most interested in, TV was the top choice. 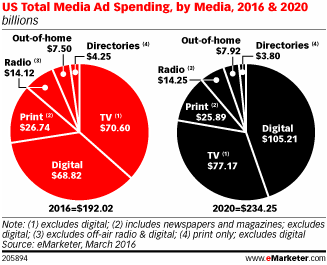 eMarketer estimates that digital—which includes mobile—is neck-and-neck with TV ad spend in the US. eMarketer expects outlays on digital ads will hit $68.82 billion in 2016, while TV spending will total $70.60 billion.

Nevertheless, no other medium can challenge TV’s dominance of the US advertising market. According to eMarketer, spending on every other medium combined, which includes print, radio and out-of-home, doesn’t come close.
Posted 6:02:00 AM