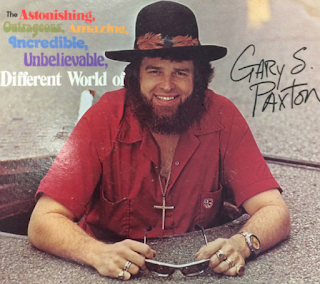 Gary S. Paxton, who began his career as a teenager in the singing duo Skip & Flip, produced the hit pop singles “Alley-Oop” (the first song played on WLS 890 AM when it flipped to Top40)  and “Monster Mash,” composed hundreds of songs and ended his career as a Grammy-winning gospel musician who also performed as the masked Grandpa Rock, died on Sunday July 17, 2016 in Branson, Mo.

He was 77, according to The NYTimes.

Paxton was a teenage high school dropout in Arizona when he wrote “It Was I” and recorded it as a demo with a guitarist and singer, Clyde Battin. It wound up with the producer Bob Shad, and Skip & Flip were born in absentia in 1959, supposedly named for Mr. Shad’s wife’s poodles.

Paxton learned the song was a hit only when he heard it on the radio while working as a cherry picker in Washington State. Skip & Flip toured with the disc jockey Alan Freed and, after recording one more blockbuster, “Cherry Pie,” split up. (Battin later joined the Byrds.)

By 1960, Mr. Paxton was in Hollywood. He produced (with Kim Fowley) and sang “Alley-Oop” with the short-lived group the Hollywood Argyles. Inspired by a popular comic strip about a cave man — “There’s a man in the funny papers we all know” — the song reached the top of the Billboard Hot 100.


He also produced “Monster Mash” for the singer Bobby Boris Pickett, a catchy single infused with crude sound effects and sung in the voice of a mad scientist who describes seeing his monster rise from his slab and introduce a new dance (“It was a graveyard smash”). The single reached No. 1 just before Halloween in 1962 and became a pumpkin-season perennial, hitting the Top 10 again a decade later.

In 1970 he relocated to Nashville, where he wrote “Woman (Sensuous Woman),” a No. 1 country hit for Don Gibson. It was also where, after his business partner’s death, as he later recalled, he “walked into a church — stoned on drugs — and got saved.”

By his own count Mr. Paxton wrote some 2,000 songs; among the latest was “When I Die, Just Bury Me at Wal-Mart (So My Wife Will Come Visit Me).” He was inducted into the Country Gospel Music Association’s Hall of Fame in 1998.
Posted 3:00:00 AM