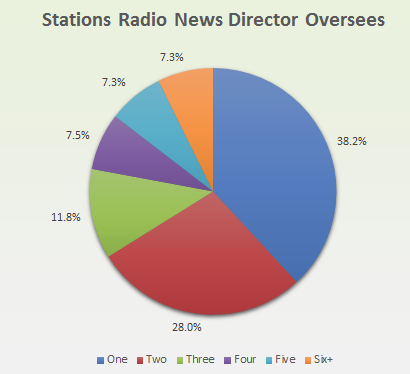 Total local TV news employment hit a near all-time high in 2015, growing by 1% and adding 270 people, according to the latest RTDNA/Hofstra University Annual Survey.  That puts total TV news staffing at 27,870, and that edges ahead of 2012 but remains below the all-time peak in 2001.

Radio staffing:  The typical (median) radio news operation had a full time news staff of one -- the same as it's been for at least 20 years ago. Radio news remains highly centralized, with the typical radio news director overseeing the news on an average of 2.4 stations with a median of 2 and a maxium of 9 in-market, plus 43 elsewhere.

According to the survey, it's a mixed (but mostly negative) picture again on staffing changes in radio this year. Overall radio news staffing isn’t much changed, but average full time went down by 0.3 from a year ago, with part time going up by the same amount.

Bottom line: the typical radio station has one full time person in news.
Posted 3:47:00 AM