L-A Radio: Victim Of Mather's Posting May Be Able To Cash-In 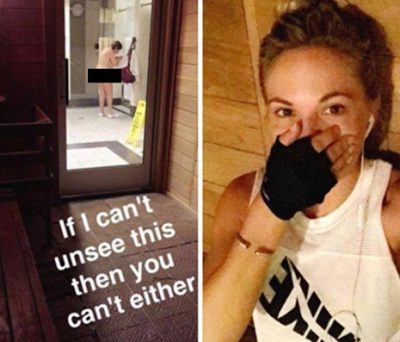 Playboy Playmate Dani Mathers’ Snapchat indiscretion could end up costing her big-time, if the subject of the body-shaming post she published earlier this month decides to file suit.

Mathers — who took a photo of an unwitting nude woman at her gym and posted it on Snapchat with the caption, “If I can’t unsee this then you can’t either” — has already lost her gig with Los Angeles Rock KLOS 95.5 FM over the post, and the Los Angeles Police Department has opened a criminal investigation into the matter.

“It could go into the seven figures, it would seem,” McRae said.

That statute forbids, in part, the intentional distribution of an image of a person without that person’s consent, if the distributor of the image knew that the subject had a “reasonable expectation that the material would remain private,” and if the image “exposes an intimate body part of the other person.”

The woman depicted in Mathers’ post was shot from the side, and media outlets that have reproduced the image have censored it to various degrees, making it unclear if a body part described in the statute was captured in the image, or if the exposure was limited to the woman’s buttocks.
Posted 3:06:00 AM