The head of the Democratic Party resigned on Sunday amid a furor over embarrassing leaked emails, hoping to head off a growing rebellion by Bernie Sanders supporters on the eve of the convention to nominate Hillary Clinton for the White House.

Lingering bitterness from the heated primary campaign between Clinton and Sanders erupted after more than 19,000 Democratic National Committee emails, leaked on Friday, confirmed Sanders' frequent charge that the party played favorites in the race.

In a statement, DNC Chairwoman Debbie Wasserman Schultz said the best way for the party to accomplish its goal of putting Clinton in the White House was for her to step aside after the convention. Sanders had demanded earlier in the day that Wasserman Schultz resign.

The furor was a blow to a party keen on projecting stability in contrast to the volatility of Republican candidate Donald Trump, who was formally nominated at a raucous convention in Cleveland last week.

It also overshadowed preparations in Philadelphia for Clinton's coronation as the nominee to face Trump in the Nov. 8 presidential election. She will be the first woman nominated for president by a major U.S. political party.

The four-day Democratic convention will open on Monday.

One email appears to show DNC staffers asking how they can reference Bernie Sanders' faith to weaken him in the eyes of Southern voters. Another seems to depict an attorney advising the committee on how to defend Hillary Clinton against an accusation by the Sanders campaign of not living up to a joint fundraising agreement.

A Wiki-Leaks emailed shows a Democratic National Committee staffer complained to "Meet the Press" host Chuck Todd about NBC's coverage of the Democratic presidential primary earlier this year, according to DNC emails made public Friday by Wikileaks. 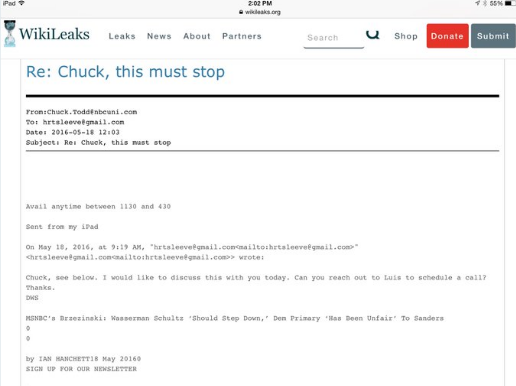 The Washington Examiner reports Luis Miranda, the DNC communications director who previously worked in the Obama White House, asked Todd to intervene with colleagues at "Morning Joe" about how they covered DNC Chairwoman Debbie Wasserman Schultz's public claims of neutrality in the primary contest between Hillary Clinton and Sen. Bernie Sanders, I-Vt.

"I'd appreciate it if you passed along the following to the Morning Joe team," Miranda wrote Todd May 18. "I understand Joe and Mika will say whatever they're going to say in terms of opinion, but at a minimum they should consider the facts on some of the key allegations they're making."

Miranda suggested a call between host Mike Brzezinski and Wasserman Schultz to patch things up, which prompted Todd to ask if he really thought that was a good idea.

"Not necessarily," Miranda wrote back. "If Mika just doesn't like her, I'm not sure it's worth either of their time."

And CNN anchor Jake Tapper is getting some criticism after his show ended up being caught up in the middle of the DNC email leak controversy. One of the emails released by Wikileaks is an exchange between The Lead‘s Jason Seher and a DNC staffer.

Seher wrote, “Thanks for facilitating Luis coming on today, and bearing with us through a meelee [sic] of GOP nonsense and cancellations and all that. Any particular points he’ll want to make? We’re gonna stay Dem focused…”

The email was forwarded to other Democratic staffers with the line “Need to know asap if we want to offer Jake Tapper questions to ask us.”

Tapper responded on his Tumblr page in the name of transparency, explaining that asking people if there’s anything they want to talk about “is a fairly standard question – producers and reporters ask it all the time of Democrats, Republicans, everyone, to make sure we don’t miss out on news-making opportunities.”

As for “Dem focused,” Tapper offers this pretty frank explanation:


Wanting to stay “Dem-focused” is a reference to the fact that I wanted to focus on the Democratic presidential contest – the fight between the Sanders campaign and Clinton campaign about superdelegates.


Other embarrassing details from the document dump include a DNC staffer suggesting it would be worthwhile to attack Sen. Bernard Sanders of Vermont on his faith, and another who wanted to frame his campaign as “a mess.”

A Democratic source told CNN on Friday that the leaks were the equivalent of “gas meets flame” as the party prepares for its Philadelphia convention July 25-28.