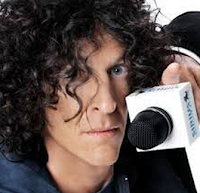 The headline on a lengthy interview with Howard Stern in the New York Times floats a big question: "What the Hell Happened to Howard Stern?"

The piece, though, is a flattering one, according to newser.com,  describing how Stern has morphed over the years into perhaps the best celebrity interviewer in the business—one who manages to elicit actual human responses, even introspective ones, from celebs used to being on autopilot. Stars once shunned him. Now they seek him out.

The bad-boy Stern is by no means gone, but the man himself is 62 now, and Stern himself sees that as a big part of the explanation for the change:

“I’ve changed a lot," he says. "I’d be sort of pathetic if I’d reached this point in my life and I hadn’t. How else do you have longevity? There are so many guys who started out with me in radio, who have disappeared, because they can’t broaden their view of what entertainment should be, or get in touch with what they find to be exciting and fun and funny.”