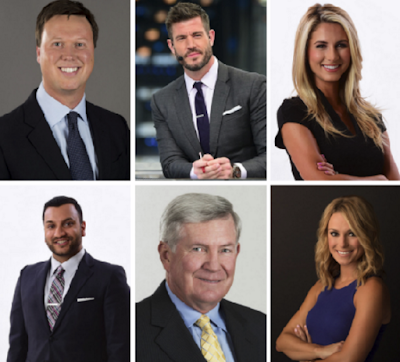 ESPN will have new play-by-play commentators and sideline reporters for both Thursday and Friday night college football games on ESPN this season and has re-signed college football analyst David Pollack.

Play-by-play commentator Dave Flemming will move to Thursday nights and will call games alongside college football analyst Jesse Palmer in a two-man booth. Laura Rutledge will be the sideline reporter for Thursday night telecasts, adding to her previously announced SEC Nation responsibilities for the season.  Play-by-play commentator Adam Amin will call Friday night games alongside analyst Mack Brown and sideline reporter Molly McGrath, whose hiring as a reporter and host was announced this morning.

“The new opportunities for Dave, Adam and Laura prove, once again, the quality of our on-air lineup and the growth opportunities that exist at ESPN, while Molly’s addition adds another high-caliber reporter and host to our roster as we enter a new season,” senior coordinating producer Lee Fitting said. “Thursday and Friday night telecasts are an integral part of our college football coverage and we look forward to these two new commentating teams working these primetime games each week.”

Additionally, ESPN has extended college football analyst David Pollack to a new multi-year deal. Pollack will continue to appear on College GameDay each week, have a more prominent role on College Football Live and contribute to additional studio shows this season. The three-time All-American at Georgia began working at ESPN in 2009 as studio analyst and joined College GameDay in 2011.

“David’s analysis, insights and, most importantly, his opinions have elevated him to a top college football analyst,” said Fitting. “Having him on our studio programming, nearly on a daily basis throughout the season, maximizes his strengths and makes ESPN’s college football coverage better.”

Last season, in addition to his College GameDay and studio appearances, Pollack was a game analyst on Thursday night telecasts, working with play-by-play commentator Joe Tessitore and analyst Palmer.
Posted 3:15:00 AM