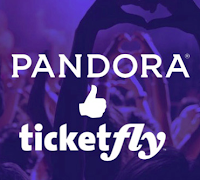 Building on its $450 million acquisition of ticketing firm Ticketfly last year, Pandora said it will begin integrating concert recommendations into its app and sending users a digest of shows of interest.

Analysts say new streams of revenue are critical for Pandora, which has yet to turn a profit since its 2011 initial public offering. Like Spotify and other music streaming services, Pandora must pay the majority of its revenue to rights holders.

The Ticketfly integration helps Pandora in its bid to diversify its business and could solve a thorny problem for music fans as well, said Ted Cohen, Managing Partner of TAG Strategic, a digital entertainment consultancy.

“For Pandora, it provides a significant and much-needed diversification of their revenue streams,” he said. “For Pandora users, it offers a seamless and elegant way to connect them, up close and personal, with their favorite artists live on stage.”

Music services such as Spotify already suggest concerts for users, but Pandora’s massive data set will set it apart, said Sara Clemens, the company’s chief operating officer. The concert suggestions will be informed by music that users listen to on the site, she said.

“It all relies on the personalization that is integral to the Pandora fan experience,” she said.

The company is also working on tools to help music venues and promoters target the right audiences for their shows, Clemens said
Posted 3:14:00 AM