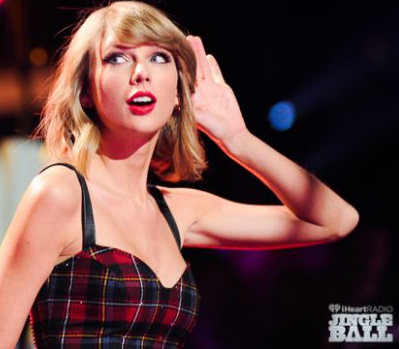 Taylor Swift, Iggy Azalea and Ariana Grande came to glow and preen, along with breakthrough stars Sam Smith, 5 Seconds of Summer, Meghan Trainor and more. Few of the artists taking part even had a career two years ago. In this realm, 41-year-old participant Pharrell seemed like Methuselah, note the NY Daily News.

iHeartMedia stations are presenting Jingle Balls across the country for the holiday season, many with a lineup largely similar to the one at Madison Square Garden. But this show, four hours long with 16 acts, was the flagship.  Mostly female artists played no more than a few songs each, centering their set lists on hits.   The NY Times reports Swift had a huge live band, complete with horn section and backup singers. Iggy Azalea, Ms. Grande, Jessie J., Rita Ora and Meghan Trainor used recorded tracks or a DJ. That suited their music, which seeks a radio-friendly convergence of R&B, hip-hop, four-on-the-floor dance music and — somewhere in the distance — girl-group pop.

The concert was full of teens and preteens, some of whom were probably being treated to their first concert by the parents who brought them.

Z100's Cubby Bryant talked with Taylor Swift about the Billboard Woman of the Year Award.