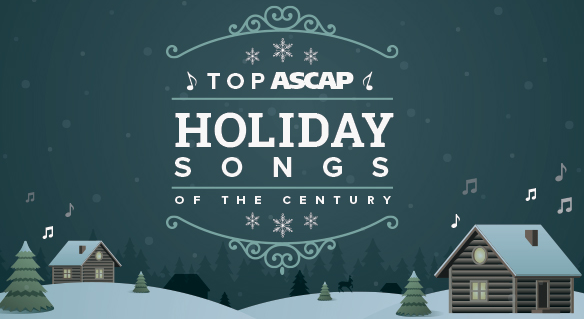 It’s become an annual tradition: at the beginning of every holiday season, the American Society of Composers, Authors and Publishers (ASCAP) announces its list of the most-performed holiday songs of the year - the evergreen hits that accompany more family get-togethers and wintertime shopping trips than any others.

This year, ASCAP presents its 100th birthday celebration into the holiday season by unwrapping the top 30 ASCAP holiday songs of all time. Topping the list is “Santa Claus Is Coming to Town,” written by Fred Coots and Haven Gillespie.

ASCAP President and Chairman Paul Williams commented: “Music reminds us that the holidays are supposed to be about togetherness and good cheer. These 30 ASCAP classics perfectly capture those themes and for many are a bridge to wonderful memories of days gone by. The list is a testament to the enduring importance of great songs and songwriters. It’s also a reminder of the essential role that ASCAP and our members play in our lives, year after year. It simply wouldn’t be the holidays without ASCAP music.”

“Santa Claus Is Coming to Town” became an unexpected hit for songwriters Fred Coots and Haven Gillespie when radio star Eddie Cantor was looking for a holiday song to sing on a Macy’s Thanksgiving Day Parade radio broadcast.

It became a smash, selling 30,000 copies of Cantor’s rendition and another 100,000 copies of the sheet music within a day of the broadcast. Perry Como, the Four Seasons, Luis Miguel and Bruce Springsteen have recorded beloved versions of “Santa Claus Is Coming to Town” over the decades; recent covers by ASCAP members Justin Bieber (2011), Rod Stewart (2012) and Sufjan Stevens (2012) have kept it relevant to today’s listeners, 80 years after it was written.

Below is the list of the top 30 most-performed ASCAP holiday songs of all time. Each song includes songwriter credits, plus the year that the song was first released, performed or published.

1. “Santa Claus Is Coming to Town” (1934)
Written by Fred Coots and Haven Gillespie

2. “The Christmas Song (Chestnuts Roasting on an Open Fire)” (1944)
Written by Mel Tormé and Robert Wells

4. “Winter Wonderland” (1934)
Written by Felix Bernard and Richard B. Smith

5.  “Have Yourself a Merry Little Christmas” (1944)
Written by Ralph Blane and Hugh Martin

17. “It’s Beginning to Look a Lot Like Christmas” (1951)
Written by Meredith Willson

20. “Carol of the Bells” (1936)
Written by Mykola Leontovych and Peter Wilhousky

30. “This Christmas” (1970)
Written by Donny Hathaway and Nadine McKinnor