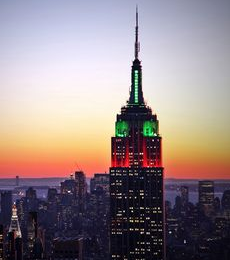 Empire State Realty Trust, Inc. and iHeartMedia have announced that they will be teaming up once again to present one-of-a-kind music-to-light shows this holiday season.

To kick off the festivities, ESRT and iHeartMedia will put on a music-to-light show on December 12, 2014, preceding iHeartRadio and WHTZ 100.3 FM / Z100′s annual holiday concert, Jingle Ball. The iconic landmark will synchronize its world-famous LED tower lights, choreographed by internationally-acclaimed lighting designer Marc Brickman, to global superstar and Z100 Jingle Ball performer Taylor Swift’s new hit, “Welcome to New York.” Those fans wishing to watch the light show live can look skyward and tune in to Z100 at 7 p.m.

December also brings the return of the Empire State Building (ESB) Holiday LED tower music-to-light show series. Four one-of-a-kind music-to-light shows, synchronized to timeless holiday songs on iHeartMedia’s  WLTW 106.7 FM LiteFM and via the iHeartRadio mobile app, will play each night at 7 p.m. beginning Saturday, December 20, through Tuesday, December 23, 2014. Fans across the globe will have the unique opportunity to help select the grand finale light show that will be replayed on Christmas Eve at 7 p.m. by voting for their favorite video on www.empirestatebuilding.com. Music for the winning show will be played on iHeartMedia’s powerhouse radio stations 106.7 Lite fm, Z100, and 103.5 KTU.

For those unable to view the shows live, ESB will post a video of each show immediately after on its YouTube page.
Posted 3:06:00 AM