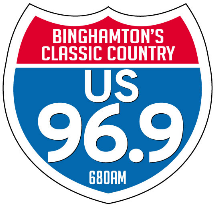 iHeartMedia/Binghamton overnight launched a US 96.9 Binghamton's Classic Country. The station made the flip from Oldies at midnight.

Tom Scott is the PD who also handles New Country WBBI 107.5 FM/B1075 and WMXW 103.3 FM/Mix, a mainstream AC which is "Binghamton's Christmas Music Station" through the holiday.