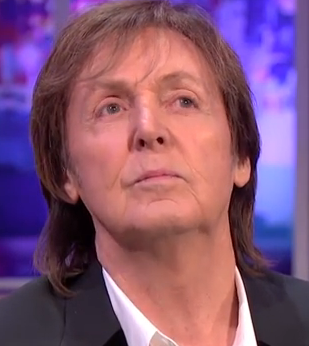 John Lennon was assassinated outside his Manhattan apartment 34 years ago today, on 8 December 1980. Paul McCartney has said he got an early morning phone call. "It was just so horrific, you couldn't take it in and I couldn't take it in." (BBC, ITV, me)

Lennon's killer Mark Chapman (in jail) reportedly said he had heard voices in his head telling him to kill the musician. McCartney said: "The phrase kept coming in my head, 'The jerk of all jerks.' It was just like 'this is just a jerk, this is not even a guy politically motivated, it's just some total random thing.'"

Referring to the Beatles' break-up in April 1970, McCartney said, "We got to a point where we got really crappy over business." They didn't see each other for four years. McCartney said they became "good friends" again after becoming new fathers in the mid-1970s

McCartney said the fighting between them had become "boring" and they bonded over "normal stuff" - being new fathers and bread-making recipes. "The story about the break-up, it's true but it's not the main bit, the main bit was the affection." McCartney spoke on the Jonathan Ross Show on ITV.