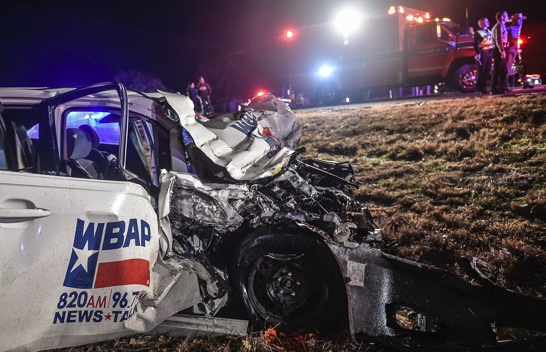 A WBAP 820 AM reporter and two occupants of a pickup were injured Friday night in a head-on collision in Wise County, according to WFAA-TV8.

According to police, rhe pickup was southbound near Springtown, TX when it crossed the center line. The pickup and a northbound Toyota Camry collided, Haschel said.

The Camry had a WBAP logo on the doors. Cox said WBAP is "not sure what [Scaia] was covering."

Cox said Saturday that Scaia, who's been with WBAP for about five years, was in intensive care. His condition was upgraded over the weekend from critical to serious.

"Our news department is obviously shaken by this," said WBAP/KLIF News Director Rick Hadley. "Alan is a good friend and important part of our team and right now our main concern is for him and the others inujured in the wreck to get better."

Scaia was recently promoted to morning drive reporter at WBAP/KLIF and had been named a correspondent for a new national news operation. He had previously been a dayside reporter and fill-in anchor with WBAP/KLIF. He is a Ball State University graduate who previously worked at radio stations in Houston and Portland.
Posted 3:32:00 AM