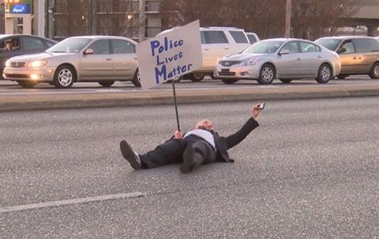 Jackson says the students blocked traffic without a permit, and if they were allowed, he should be able to as well.

As he marched, he carried a sign reading "the truth matters, police lives matter."

Jackson feels many truths have been looked over, as national protests concerning two high-profile cases involving police continue on.

Seven police cruisers escorted him from Wynn Drive across University.

Jackson was even allowed to lie on the street for two minutes while police held traffic at bay.
Posted 4:00:00 AM