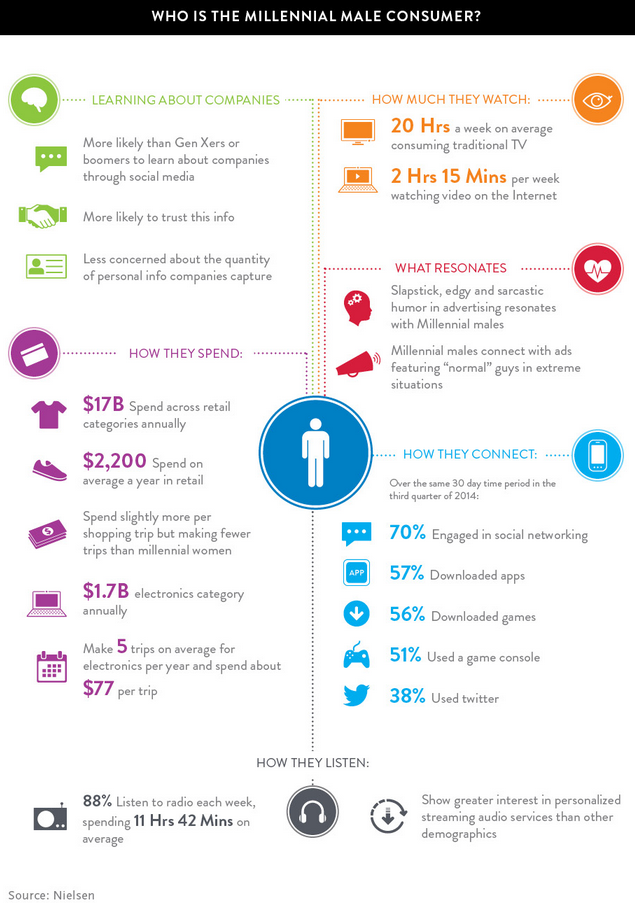 A new study from Nielsen shows Millennial males spend less time on average each week consuming traditional TV—only 20 hours, compared to 23 hours for Millennial females, 28 hours for Gen X males and 38 hours for Boomer males. However, they make up much of the difference online. This group spends significantly more time per week (2 hours 15 minutes) than any other demographic watching videos on the Internet.

Radio:
Millennial men are also heavy music listeners. Eighty-eight percent of all Millennial males in the U.S. listen to radio each week, spending more time than their female counterparts tuned in (11 hours and 42 minutes vs. 10 hours and 46 minutes). They also show greater interest in personalized streaming audio services—think Spotify or Pandora—than other demographics.

When it comes to social networking, 70% of Millennial males were engaged in social networking while only 38% of older men used social media platforms over the same 30-day period in the third quarter of 2014. So how did their social profile break down? Thirty-eight percent of Millennial men used Twitter, 56% downloaded games, 57% downloaded apps and 51% used a game console, compared with 14%, 24%, 36% and 23%, respectively, for non-Millennial men.
Posted 3:16:00 AM