In 1928…In Nashville, George D. Hay used the term "Grand Ole Opry" for the first time when introducing the show to the WSM radio audience.


In 1940...the first NFL championship was broadcast on national radio. The Bears beat the Redskins, 73-0.


In 1941…A Presidential Address was delivered at 12:30 p.m. to a Joint Session of Congress by U. S. President Franklin D. Roosevelt, one day after the Empire of Japan's attack on the Pearl Harbor Naval Base in Hawaii. Roosevelt described the previous day as "a date which will live in infamy." Within an hour of the speech, Congress passed a formal declaration of war against Japan and officially brought the U.S. into World War II. Britain and Canada also declared war on Japan, although both countries already had been fighting World War II in Europe against Germany.


In 1962…In New York City, disc jockey and promoter Alan Freed appeared at his payola trial and admitted to receiving money from record labels to play their songs on the air. He was found guilty, fined $300, and given six months probation, but the irreparable damage to his reputation and career had been done. Dick Clark, host of ABC-TV's "American Bandstand," was also questioned but was cleared of all charges.


In 1980…Two months after his 40th birthday, John Lennon was murdered by Mark David Chapman, outside his home at the Dakota apartment building on the northwestern corner of 72nd Street and Central Park West in New York City. 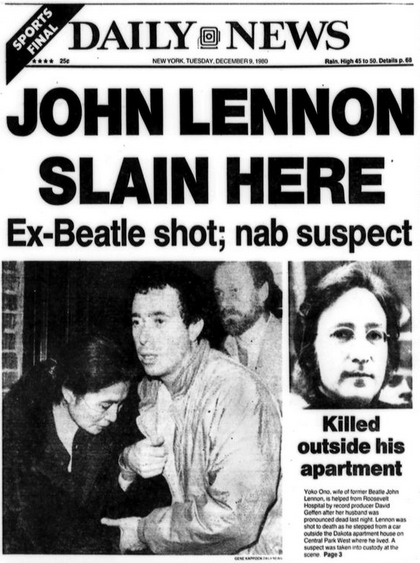 After approaching the former Beatle and calling his name, Chapman dropped into a combat stance and shot John in his chest, back and left arm. Lennon staggered into the porters' vestibule and was comforted by porter Jay Hastings, who covered him with his jacket and removed his glasses. Police were quickly summoned and took John to Roosevelt Hospital on West 59th Street. Doctors did everything they could to save him, but John Lennon was pronounced dead at 11:07 p.m. A sobbing Yoko Ono cried "Oh no, no, no, no ... tell me it's not true," and was led away in shock.

The 24-year-old Chapman remained at the scene, took out his copy of "The Catcher in the Rye" and read it until the police arrived and arrested him without incident.

Many Americans learned of the tragedy while watching ABC-TV's "Monday Night Football." Howard Cosell announced the news of the murder: "This, we have to say it, is just a football game, no matter who wins or loses. An unspeakable tragedy, confirmed to us by ABC News in New York City: John Lennon, outside of his apartment building on the West Side of New York City, the most famous perhaps of all of the Beatles, shot twice in the back, rushed to Roosevelt Hospital, dead on arrival."


In 2004…Producer/former "American Bandstand" host Dick Clark was hospitalized in Los Angeles after suffering a stroke. Clark later reduced his workload and public profile but returned to Times Square for limited TV segments during the annual New Year's Eve celebrations. He died of a heart attack in April 2012.