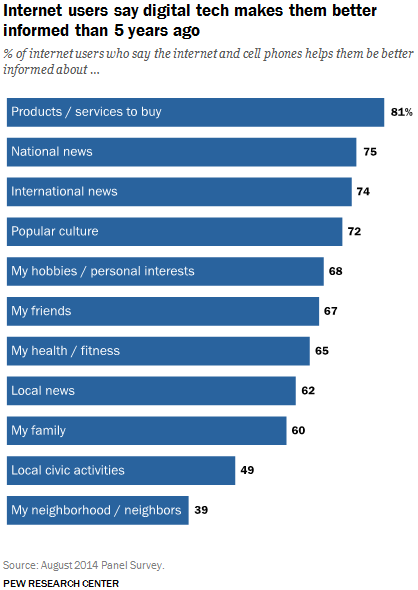 Rather than crushing them with too much information and making it hard to find useful material, most Americans say the internet and cell phones have brought benefits in learning, sharing and diversifying the flow of information into their lives. A new survey by the Pew Research Center finds that the vast majority of Americans believe their use of the web helps them learn new things, stay better informed on topics that matter to them, and increases their capacity to share ideas and creations with others.

These generally positive attitudes are buttressed by the view that people like having so much information at their fingertips, rather than feeling information overload. Moreover, this positive judgment extends to the broader culture. Most believe that average Americans and U.S. students are better informed than in the past.

The survey of 1,066 internet users shows that  87% of online adults say the internet and cell phones have improved their ability to learn new things, including 53% who say it has improved this “a lot.”1 Internet users under age 50, those in higher income households, and those with higher educational attainment are especially likely to say the internet and cell phones help them “a lot” when it comes to learning new things.
Posted 3:10:00 AM