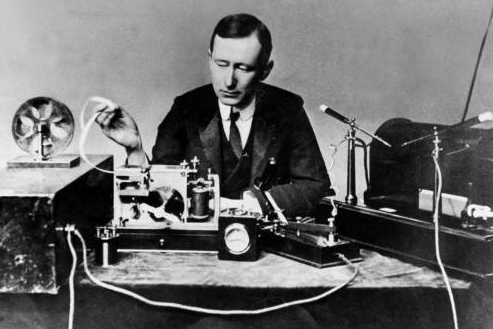 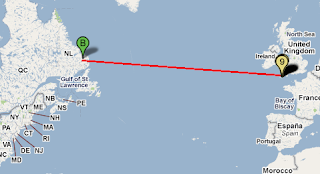 Italian physicist and radio pioneer Guglielmo Marconi succeeds in sending the first radio transmission across the Atlantic Ocean, disproving detractors who told him that the curvature of the earth would limit transmission to 200 miles or less. The message--simply the Morse-code signal for the letter "s"--traveled more than 2,000 miles from Poldhu in Cornwall, England, to Signal Hill in Newfoundland, Canada.

Born in Bologna, Italy, in 1874 to an Italian father and an Irish mother, Marconi studied physics and became interested in the transmission of radio waves after learning of the experiments of the German physicist Heinrich Hertz. He began his own experiments in Bologna beginning in 1894 and soon succeeded in sending a radio signal over a distance of 1.5 miles. Receiving little encouragement for his experiments in Italy, he went to England in 1896. He formed a wireless telegraph company and soon was sending transmissions from distances farther than 10 miles. In 1899, he succeeded in sending a transmission across the English Channel. That year, he also equipped two U.S. ships to report to New York newspapers on the progress of the America's Cup yacht race. That successful endeavor aroused widespread interest in Marconi and his wireless company. 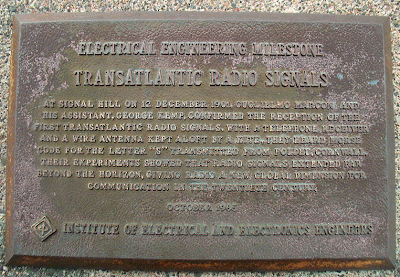 Marconi's greatest achievement came on December 12, 1901, when he received a message sent from England at St. John's, Newfoundland. The transatlantic transmission won him worldwide fame. Ironically, detractors of the project were correct when they declared that radio waves would not follow the curvature of the earth, as Marconi believed. In fact, Marconi's transatlantic radio signal had been headed into space when it was reflected off the ionosphere and bounced back down toward Canada. Much remained to be learned about the laws of the radio wave and the role of the atmosphere in radio transmissions, and Marconi would continue to play a leading role in radio discoveries and innovations during the next three decades.

In 1909, he was jointly awarded the Nobel Prize in physics with the German radio innovator Ferdinand Braun. After successfully sending radio transmissions from points as far away as England and Australia, Marconi turned his energy to experimenting with shorter, more powerful radio waves. He died in 1937, and on the day of his funeral all British Broadcasting Corporation (BBC) stations were silent for two minutes in tribute to his contributions to the development of radio.


In 1957...KEX, Portland, Oregon Disc Jockey Al Priddy, was fired for playing Elvis Presley's rendition of "White Christmas." He violated the radio station's ban against the song. The station had banned Presley’s interpretations of Christmas carols, believing that such a sexually-charged performer had no business recording religious music.

In 1961...Ham radio satellite Oscar 1 was launched with military Discoverer 36


In 1971...David Sarnoff, who founded the National Broadcasting Company (NBC) and throughout most of his career led the Radio Corporation of America (RCA), died at age 80. 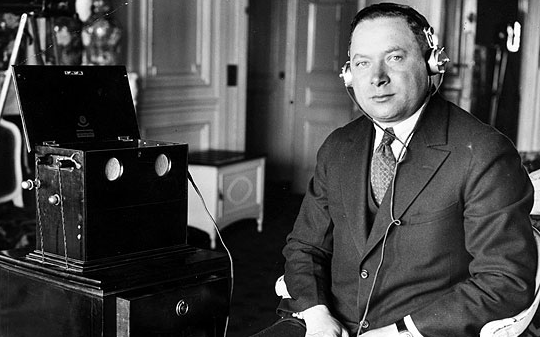 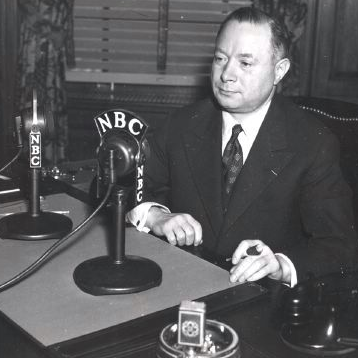 In 1926, RCA purchased its first radio station (WEAF, New York) and launched the National Broadcasting Company (NBC), the first radio network in America. Four years later, Sarnoff became president of RCA. NBC had by that time split into two networks, the Red and the Blue. The Blue Network later became ABC Radio.[3] Sarnoff was sometimes inaccurately referred to later in his career as the founder of both RCA and NBC, but he was in fact neither.

Sarnoff was instrumental in building and established the AM broadcasting radio business which became the preeminent public radio standard for the majority of the 20th century. This was until FM broadcasting radio re-emerged in the 1960s despite Sarnoff's efforts to suppress it (following FM's initial appearance and disappearance during the 1930s and 1940s.

In 1995...the CBC (Canadian Broadcasting Corporation) announced the Radio Canada International service would end on March 31.

In 2003...Unkle Roger McCall, a long-time DJ on Classic Rock WCMF 96.5 FM, Rochester, New York, was fatally wounded by a gunshot in a robbery attempt.  His killer has never been brought to justice.

McCall was gunned down in December 2003 in his son’s driveway by “just a boy” who disappeared forever under the cover of a darkening night and a sudden snow squall — leaving behind holes in Roger’s stomach, in his family and in a wide circle of close friends, listeners and fellow musicians who knew him as Unk, Unki, Unkle Roger.

Unkle Roger was 52 and despite having a microphone in front of him for 30 years working as disc jockey for WCMF, he had a relatively well-kept secret.

Several years before he was killed, he had been diagnosed with prostate cancer and was terminally ill. He didn’t discuss his illness — though others on the radio did — said his wife, Denise McCall, because he didn’t want that to define what remained of his life.

In 2008...Spike O'Dell did his last broadcast on WGN-AM. He spent 21 years with the station, 8 of them doing mornings.

Odell’s first radio hosting position was at WEMO-AM in East Moline at the age of 25.  While working at the factory, he disc jockeyed on weekends there as well as doing some fill-in slots. In 1977 Spike took another part-time job with WQUA radio in Moline Illinois. Following this, he obtained a full-time morning position at KSTT-AM, where he affectionately was referred to as “Spike at the Mic”. This proved to be a significant position, as it allowed O'Dell to move, in 1981, to a Major Market Morning Radio spot at WBT-AM in Charlotte, NC. After a brief stint as "morning guy," he returned to KIIK-FM. In 1987, Billboard Magazine awarded Spike “Top 40 Air Personality of the Year” in a Medium Market.

The Billboard magazine award lead to a call from then program director Dan Fabian to interview at WGN-AM in Chicago. In 1987, O'Dell was hired as the afternoon drive host for the station. Spike would go on to work 21 years at WGN. He remained at the top of the ratings in all the dayparts he hosted while at the station. O'Dell moved around a few times during his tenure at WGN, with notable stints in the afternoon, and ultimately, in the morning drive slot. The move to mornings occurred after the untimely death of then host Bob Collins.  O'Dell now enjoys spending time with his 5 grandchildren, golfing, photography, watercolor and acrylic painting, and sleeping late.

During the course of his career, he worked at: