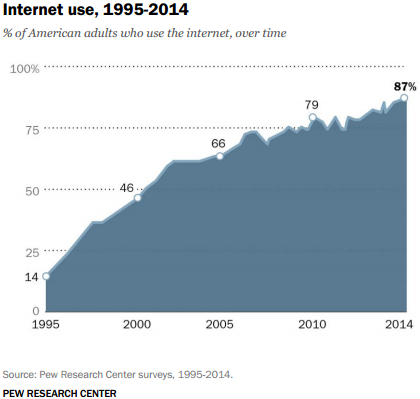 Since 1995, the Pew Research Center has documented this explosive adoption of the internet and its wide-ranging impacts on everything from: the way people get, share, and create news; the way they take care of their health; the way they perform their jobs; the way they learn; the nature of their political activity; their interactions with government; the style and scope of their communications with friends and family; and the way they organize in communities.

In a new national survey to mark the 25th anniversary of the Web, Pew Research finds further confirmation of the incredible spread and impact of the internet:
Impact: Asked for their overall judgment about the impact of the internet, toting up all the pluses and minuses of connected life, the public’s verdict is overwhelmingly positive:
Read or download the full report: Click Here
Posted 3:35:00 AM